Monero (XMR) coin is predominantly used because of its security, privacy, and anonymity related features. This coin is completely untraceable, and it is being used similar to fiat currency. The features like Ring Signature and Stealth address have attracted a huge customer base towards this coin. After several deals with some major hotels and gaming community, Monero (XMR) has tied up with Trezor wallet recently. This will boost the brand image of Monero and will help in gaining an edge over peers. 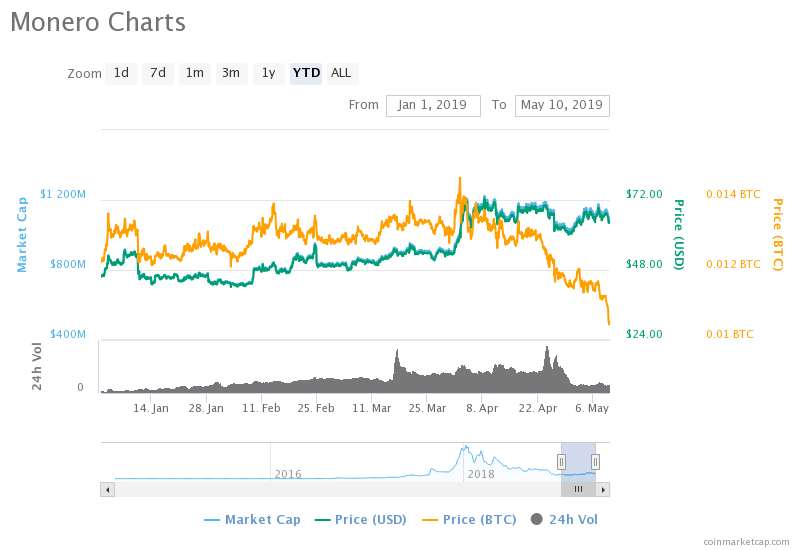 Monero (XMR) started the year with $46 mark right after the so-called crypto winter. The momentum was continued for a short span and it started showing many abrupt ups and downs. However, a stable growth can be noticed on Monero’s track at the onset of April. However, this growth was sustained for a period longer than expected. The value is now undergoing a price correction stage. The market cap on 10th April was $1,159,564,154 and the value of each Monero coin was $68.58 and 0.01314790 BTC. The current market cap and the value of each Monero coin are almost 5% less than the value of 10th April.

Recently, Monero (XMR) has come into agreement with many diverse and major forms. It first took a plunge into the gaming community by associating with Xbox and then it associated itself with the travel major firm, Trippki. Now, it has managed to list itself as a payment alternative on the Trezor platform. Along with major cryptos like Bitcoin and Litecoin, one can buy a Trezor hardware wallet paying Monero coins as well. These things will have a bullish bearing on the outlook of Monero. The short-term Monero Prediction goes with $70 with resistance at $72. The long-term outlook goes with $100 to $120 level.

As a short term growth is anticipated, this is the perfect time for buying Monero coins. Long-term holding at least until 2020 will give almost 50% profit on the invested amount.