Monero is a decentralized blockchain which allows for complete anonymity of the tractions of the users when this network is used. The coin was in traduced in April 2014 as ‘BitMonero’ which is a hard fork of Bytecoin cryptocurrency. Since issues like hacks and vulnerabilities had plagued Bytecoin, the name was updated to Monero. This digital coin concentrated on the shortcomings of Bytecoin and ended up being the platform for anonymity. Its cryptocurrency is denoted by XMR, with a total supply of 18.4 million coins.

Though Monero hasn’t been a very popular cryptocurrency compared to many others of its type, it has a community that follows the currency for its purpose. This digital currency is being compared to the Bitcoin majorly because of its purpose – its single-minded focus on privacy, what Bitcoin was meant to be. Monero uses the CryptoNight algorithm for its network security and privacy to users, different from Bitcoin’s SHA-256 algorithm, which emerged from the CyptoNote protocol that allows the transactions on the blockchain to be mixed with each other, making it difficult to trace the origin of the transaction. Since the algorithm is not compatible with ASICs, this allows for more decentralization which means this cryptocurrency covers larger demography. Monero technology is said to be decentralized, private and fungible. 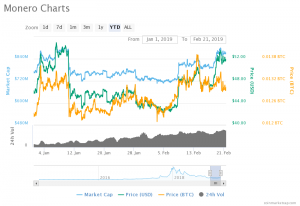 The price of the XMR/USD pair is $51.89, and that of XMR/BTC is 0.01303285. The 24h volume of the cryptocurrency on February 21st is 62,350,252 (12:49 UTC). Based on the analysis by Coinmarketcap, the data about the trading moment of price and Market Cap value has been deducted. The reports show that BTC had been on a high tide between January 01 and January 11 and has been on huge variations compared to the MCap/USD pair values. The MCap values and the USD values have been overlapping with each other. Their values were on a consistent downtrend between January 10 and February 08, before their values rose drastically. Their values were on a high on January 07 with MCap value USD 915,816,622 – a 5 percent hike from the current value. The cryptocurrency reached its milestone between February 03 and February 13. The price of USD rose by 19.94 percentages, and the values increased from $42.13 to $50.53.

The 14-day moving average shows values ascending from 732,632,206 USD on February 7th to 872,188,245 USD (current value) and an 18.81 percent increase. With both the averages going uphill, the bulls hold an upper hand. Bullish market means to invest time for the investors to get long term benefits. Traders can also earn a profit from their transactions due to the rising market. Based on above analysis and Monero forecast, investment from traders will increase the value of the cryptocurrency in the future.

Market Analysis on Cardano (ADA) and its extensive growth

Want to Explore World With Crypto? Make it Happen Now!!