NEO has been in talks due to its attempted efforts for increasing speed and scalability. The founder of Neo, Da Hongfei, at the Consensus Summit in New York said NEO is the only coin in the present times which can give a tough fight to Bitcoin and Ethereum. But the catch here is ‘Centralized Blockchain.’ As per the founder, centralization of blockchain will bring speed and scalability needed for the transactions to happen. Once it is done officially, we can see its implications on the market. It is predicted that the value of each NEO coin will be at 20 USD by the end of this year. Let us read the current figures to understand the growth pattern more efficiently. 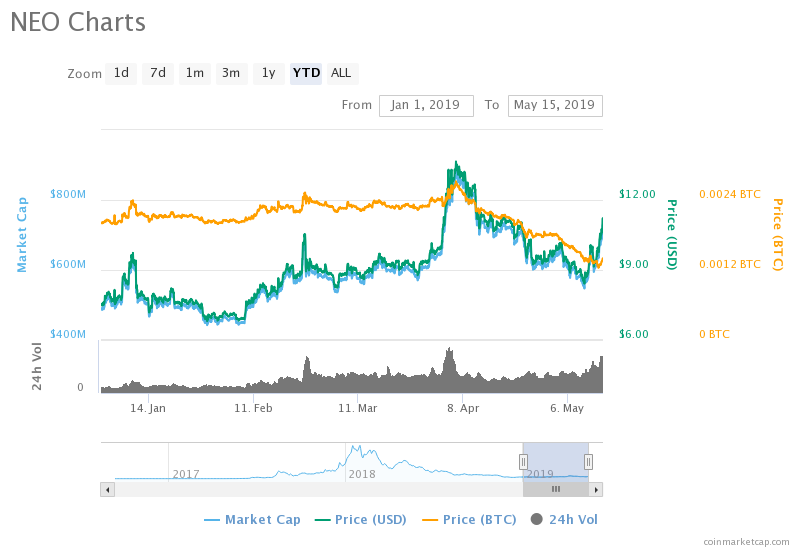 The growth pattern of NEO since the very start of the year 2019 is stable. There have been minimal instances of steep ups and downs. The lowest point of the year was on 6th February at 6.82 USD. The major growth was achieved on the 1st April market boom. The highest point of the coin was on 6th April when the coin reached 13.36 USD. The market cap on 15th April was 725,768,682 USD. And the value of each coin stood at 11.17 USD and 0.00216268 BTC. The current market cap and the value of each coin are respectively 0.52% & 0.44% more than the values of the previous month.

Buying fresh coin at this price is advised. Holding coins until 2020 will give a dividend of at least 5 times of current value.