Neo (NEO) is known as Chinese Ethereum and previously known as Antshares. The huge Chinese economy has helped the Neo coin to get a huge base of users and it claims of using an algorithm called Delegated Byzantine Fault Tolerance (dBFT). 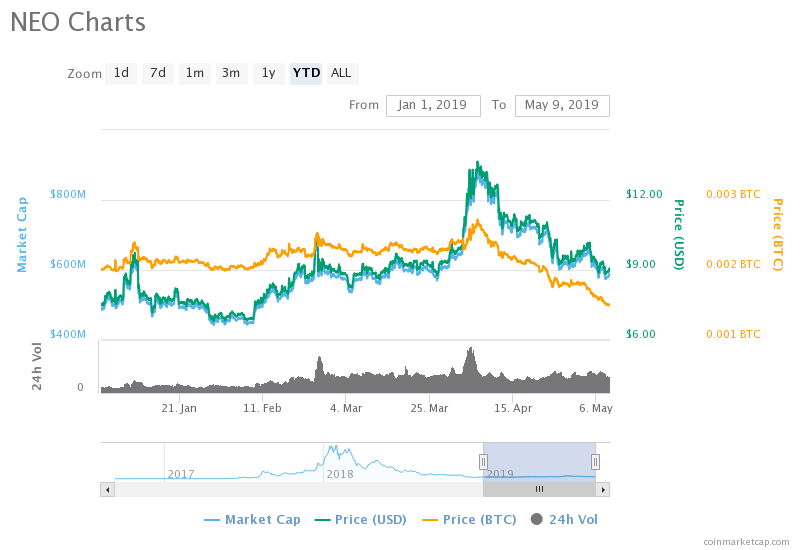 Neo (NEO) has performed more or less with a stable outlook with less than 5 instances of price variations until May from the starting of 2019. The major growth was achieved on April 06th when it gained almost 40% in just a week. Since then Neo is experiencing a price correction phase, and this phase has dragged the coin to its real market value. This inconsistency also has eliminated speculators from the market. The market cap on 9th April was 816,074,369 USD, and the value of each coin was 12.55 USD. The current market cap, as well as the value in USD, has deflated by 27% in these 30 days.

Recently Neo Smart Ecosystem has tied up with Zeux payment system. This payment system has enabled the customers to pay cryptocurrency while buying from Apple and Samsung Pay. This alliance with a multi-purpose financial platform will boost the image of Neo coins in the market giving a positive effect on trading price and volume. Based on the NEO coin price prediction, we predict an upcoming surge in Neo coin price in the next quarter. The value will face resistance at 12.10 USD level. By the end of 2019, this coin may reach its previous all-time high of 148 USD to 155 USD level. By the end of 2020, this value may see a doubling.

The current value may see an uptrend, and it makes the current price the best to buy Neo coins. The current value will give a reasonable profit holding it for at least a quarter. The long term outlook is very bullish; the players with patience may pocket the previous insane profits.