Neo is a blockchain based platform that supports its own cryptocurrency and which is designed to build a scalable network of decentralized applications such as digital assets, digital identities, and smart contracts. Neo is referred to as “China’s Ethereum” because of the similarities of these smart contract platforms to bring blockchain to the masses. However, Neo has improvised from Ethereum’s mistakes and with the support of various technological advances and has become the world’s premier smart contracts platform.

Neo aims to automate the management of digital assets through smart contracts and aims at developing a network-based smart economy system. On the Neo platform, assets can be easily digitalized on an open, decentralized, trustworthy, traceable and transparent method without any intermediaries in between and with no hidden cost. Users are allowed to record, buy, sell, exchange or circulate various kinds of assets and can keep track of their transactions. It also provides a platform to link the physical asset with an equivalent, and unique digital form on the network and these assets are protected by law. The transaction fees to utilize the NEO network can be paid using the non-divisible NEO token which generates the GAS tokens. 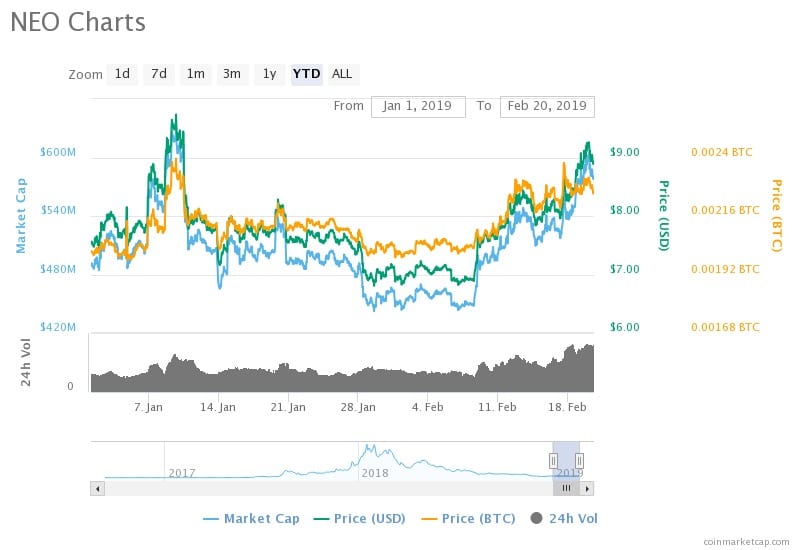 The analysis from Coinmarketcap states that Neo is ranked 17th in the market of cryptocurrencies and its market value as on February 20 at 13:24 UTC is 579,640,605. The market cap value of Neo has been on a sway, although they reached a higher value on January 9th of 621,234,407 USD. The value saw a minor fall on January 11th and has been downhill until they started climbing on February 9, 2019. The 20-day Exponential moving average (EMA) exhibits a stabilized uptrend in its current value. The values had a relative growth of 28.20% in its current value from its past on January 30 with $452,135,819. The values being on the bullish market has added to the digital currency’s advantage.

Compared to the current rate, data show that Neo had a prosperous past year. The market cap value was at its peak, but the values went downtrend month after month. There was a significant rise in the values from the beginning of December. The MCap/BTC pair has been taking the lead compared to the USD’s price. The current price of USD and BTC are 8.92 and 0.00225737 as on February 20 at 13:24 UTC and the 24h volume is 256,393,687. The market started to ascend from February 2019, and it has been uptrend ever since with minor downs. The cryptocurrency reached a significant milestone between December 22 and January 9 when the price of USD raised by 39.47 percentage from $6.84 to $9.54 in a short period of 18 days.

According to the stats from Coinmarketcap, the 14-day moving average also saw progress from $460,958,776 on February 5 to $579,640,605 on February 20 – 25.75% increase. With both the moving averages on an uptrend and the bullish pressure on the market, the cryptocurrency’s balance is in favor of the buyers both long term and short term investments. Investors would see a good profit if this market trend continues in the future. Similarly, traders investing in this cryptocurrency will increase the value of both the currency and their investment.

Price analysis of Bitcoin Gold and its growing market

Can Blockchain Rock the Stage of Telecommunication?