Ripple (XRP) has been again dragged to the contention for wrong reasons. Recently a major blockchain company Coin Metrics has discovered in Ripple’s escrow account reporting system. It has found a contradiction in Ripple’s reporting system, which needs to be investigated. The report states, “Coin Metrics found several important discrepancies between what was publicly reported by Ripple and what was visible on the XRP ledger.” As per the findings, Ripple has an under-reported number of XRP coins released from the escrow account. This finding has an immense negative impact on the price path of Ripple. However, the medium-term outlook is bullish. The 2019 prediction target rests at $1. We should now analyze the current figures of Ripple coin to understand the growth pattern. 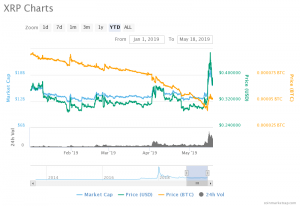 As mentioned earlier, the findings are really massive. But it will not have many implications on the price pattern of Ripple (XRP). The value of Ripple in USD will find resistance at 0.45 USD. The 2019 prediction goes with 1 USD mark, and we predict the near future to be full of price swings. So, patience is what required for the investors.

The new entrants are welcome to the dive into the Ripple’s growth story. This low price has made a suitable time to buy fresh coins. Holding until 2020 will give at least 3 times profit on the current investment.

NULS Teams up With Consensus Labs