Ripple (XRP) is a creation of Ripple Labs Inc. which relies on Ripple Consensus Ledger and it assists the users as a real-time gross settlement system, currency exchange, and remittance network. 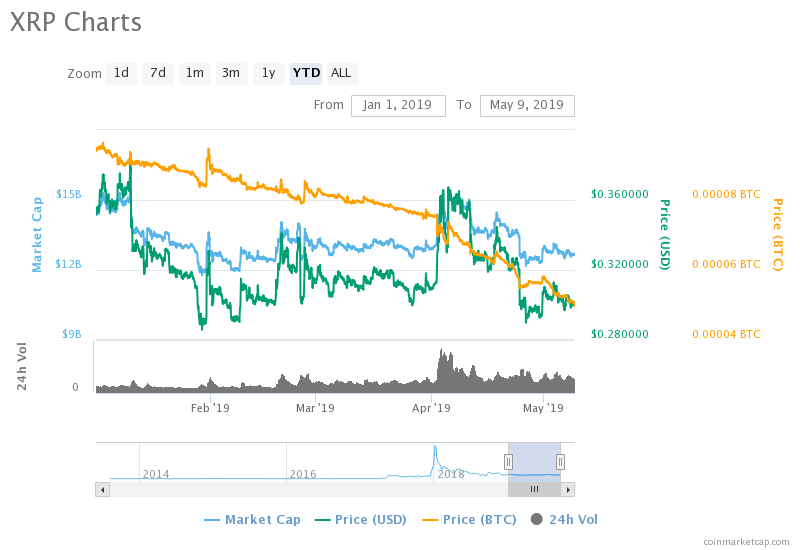 Ripple (XRP) is one of the most unstable coins in the global crypto market if the path until May from January is considered. There have been many instances of abrupt growths and declines in the market. The lowest point of Ripple was on January 29th at 0.28 USD and the highest value was achieved on April 04th at 0.36 USD during the April boom. The market cap of Ripple (XRP) on 09th April was 14,655,426,682 USD and the value of each Ripple coin was 0.350674 USD. The current market cap, as well as the individual Ripple coin, is around 13.26% less than the values of last month.

Ripple (XRP) was anticipating a huge boost in its market image by making xCurrent 4.0 live which would integrate 200+ customers in the XRP- powered xRapid payment system. As per the recent information, xCurrent 4.0 is live now. So, a boost in the trading value of Ripple (XRP) is likely now. We predict the Ripple coin to move upwards smoothly in the next few months until the end of this quarter. The coin will face the 1st resistance at 0.32 USD and 0.34 USD level. And by the end of the next quarter, the value should be around 0.35 USD or even more. As per some reports, Ripple will reach 500 USD by the end of 2019. The boost will be less than expected. As per our prediction, the Ripple coin will touch 5 USD mark by the end of 2019.

We advise potential buyers to take advantage of the current price. The long term holding will give at least 10 times the current invested value.