Even though it is right now in the bearish pattern because of its trading below its 200 days moving average, it is a safe and high return investment. Experts predict a target of 9.965 USD within the next five years.  It is a 2500 % return if it reaches that level.  It is not without reason that they are predicting this kind return from Steem. Apart from its ability to bounce back to new heights in a short period, the fundamentals are also healthy.  Its innovative projects like powering real applications through social apps like Steemit have millions of customers. 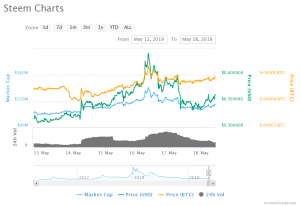 From yesterday’s close of 0.36 USD, it is trading 2.77 % higher. Today in early trades in the morning at 5.54 UTC it has gone up to 0.41 USD and a low of 0.36 at 15.09 UTC. So far for the day, it has shown an intraday movement of 0.05 USD with an increase in volume. But the worrying factor is the volume is increasing only on the downside from the morning to evening now.  But so far it has not cut its yesterday’s low of 0.36 but has traded intraday above yesterday’s high of 0.40 USD.  Hence it is a mixed bag of trading today.

From the start of 2019, it is range bound between 0.25 on January 14th to 0.55 its three month high. Once it breaks the three months high, it could see an upsurge. Till then, the short term pattern is only bearish.

Since Steem is trading near its all-time low, it is time to accumulate it as it gets closer to it. The risk is minimum of going below all-time low, and the upward chances over time are maximum. Hence for the long term, investors buying Steem with some strong fundamentals will be the best investment for skyrocketing returns.