Bitcoin- one of the most popular and the largest cryptocurrencies among many others- is an open source digital payment currency that uses a digital medium of exchange and peer-to-peer technology to create and control monetary transactions on the exchange platform. Bitcoin working methodology is rather simple, and the payments are made via Bitcoin wallet App on the user’s system or mobile device. On the outside, the complete transaction is very simple. The user has to enter the Bitcoin address of the receiver along with the amount to be paid. Entering the send button completes the transaction process. This is done without the presence of any financial institution or an administrator. Nobody owns or controls this cryptocurrency, and everyone is permitted to take part in it.

Bitcoins are created by a competitive and decentralized technique called mining. The miners use specialized hardware to process the transaction and to secure the network. Bitcoin mining is under process right now in order to reduce the cost of mining which will, in turn, give huge monetary returns. The price of Bitcoin grew significantly within a short period of time making BTC/USD, the most desired pair amidst the investors and traders. The unique features of Bitcoin that set it apart from other cryptocurrencies, which could not cover any such remarkable changes in their payment system. 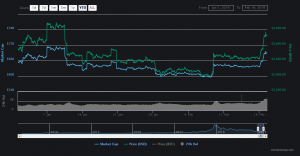 The crypto major and the 1st largest digital currency- Bitcoin’s (BTC) market cap value as on February 18 at 22:34 UTC is 68,421,560,889 USD, its price traded at $3,899.71 and its 24h volume is $9,443,814,089 USD, as per stats from CoinMarketCap. A recent analysis revealed that the market cap value has been rippling. However, the recent values have been on the uptrend. The numbers rose by 13.89% between November 27 and December 24, 2018. But the recent rise in values has been minor and rather insignificant compared the cryptocurrency’s past value. This digital currency is highly volatile, and hence, there have been a few highs the currency has got across in the past years. The first peak and the all-time high since the currency was introduced, was on December 19, 2017, when the value crossed 300 Billion USD and to be accurate, it was $318,278,828,649, and its trading price was $19,000.80 – this amounted to be the highest pricing and market value in the history of Bitcoin.

The BTC/USD pair has been going through the market with stabilized linear values between January 11 and February 8. Later the numbers started moderately moving uptrend. However, the 20-day exponential moving average (EMA) exhibits a rise of 13.31% in MCap values between January 29 and February 18 (Current value). The price proportionally increased by 13.07%. The 14-day moving average also shows an inclination, giving bulls the upper hand for this currency. The currency’s volatility is mainly due to the macro fundamentals globally, whilst both the moving average saved the currency and had pushed the market uptrend.

This falls in favor of the investors, who are interested in investing in this cryptocurrency. However, as per Bitcoin forecast, they should buy it, and hold on to it will give them huge returns from a medium to long-term perspective. The digital currency is at its prime time, so the traders are also recommended to invest, as they would receive high benefits in the mere future, thus increasing the value of the coin further.

All you need to know about Populous, a leading cryptocurrency