Tron was founded by Justin Sun on the Ethereum platform, but later it became an independent system in 2018. The idea behind the software is to empower the users by providing them a blockchain based operating system to build applications, perform transactions and publish content freely, securely and conveniently. The team of professionals has huge faith in this platform and its potential to increase scalability and adoption exponentially in the days to come. In fact, Tron platform achieved a higher throughput than Bitcoin or Ethereum by making significant amends in the protocol. Currently, it claims to handle over 2000 transactions per second in a 24*&7 set up and has over 100,000 active users. 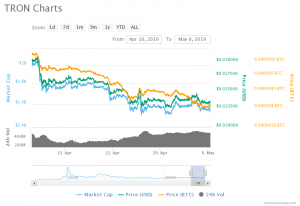 Tron team has made it a point to celebrate every single milestone with its community by utilizing the power of social media. Recently, the company tweeted about the team strength growing to over 355 plus people in just 500 days and invited many comments & wishes from its supporters. Moreover, the much-awaited project of Tron, DAppChain is due to be launched by May 30, and the price of the coin can soar post this. The project promises an increase in transaction speed & capacity, full proof security & flexibility and lesser consumption of energy. Hence, the investors are betting high on TRX now. This is the best time to invest in TRX in bulk and secure a long term investment as the currency grows further. With its addition on Coingate in early 2019, the currency is now accessible than never before. Moreover, As per TRX Prediction by experts, with partners like Oracle, Aurora, Steemit, TRX can yield spell bounding results in the imminent future. By the end of 2019, the price of the coin can reach as high as 1 USD, and it can go up to over 10 USD in the next 2 years.