The basis behind the creation of the whole cryptocurrency market is to make the currency decentralized- free from anyone’s control. But recently eyebrows have been raised on Tron’s operation style when it’s CTO and co-founder; Lucien Chen declared that he left Tron (TRX) over disputes on decentralization. He later on founded a Volume Network with a special focus on decentralization and security of the coins. However, this even seems to have not impacted the market of Tron the way it should have been. The market of Tron is on the right track, and it is predicted that the coin may even reach 0.08 USD by the end of this year. Before getting into more specifics of price prediction, we should analyze the current figures of Tron. 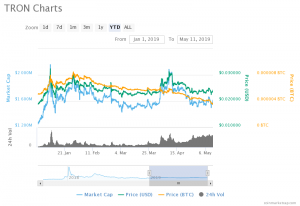 The departure of the CTO of Tron (TRX) could not make much serious impact on the growth path of the coin. In fact, recently Tron’s CEO posted a tweet mentioning Tron in just 319 days has surpassed the transactions of Bitcoin of over 10 years. According to TRX Forecast, the coin to reach as high as 0.08 USD by the end of 2019. The long term outlook is also bullish. The value may reach as high as 0.21 USD to 0.30 USD by the end of 2020.

Acquiring fresh Tron coins is advised now at this low price. Holding for a minimum of 1 year will bring 10 times the current value of the investment.