Verge (XVG) is a privacy-centered and decentralized digital currency which has been making alliances and market developments promptly in order to retain this title. Recently, Verge (XVG) has announced that it has released an iOS wallet which can store Verge coins. This has prompted a major surge in the value of each Verge coins. This wallet will support Apple watch, touch & Face ID support and Siri of Apple phones and this wallet will store the private keys in the mobile device making the coins more secure. This development has managed to push the coin to newer heights, but soon the price correction phase sets in. The value of each Verge coin will grow for a short term before facing resistance at 0.0085 USD. To strengthen the reasoning behind this prediction let’s analyze the current status of the coin and its movement. 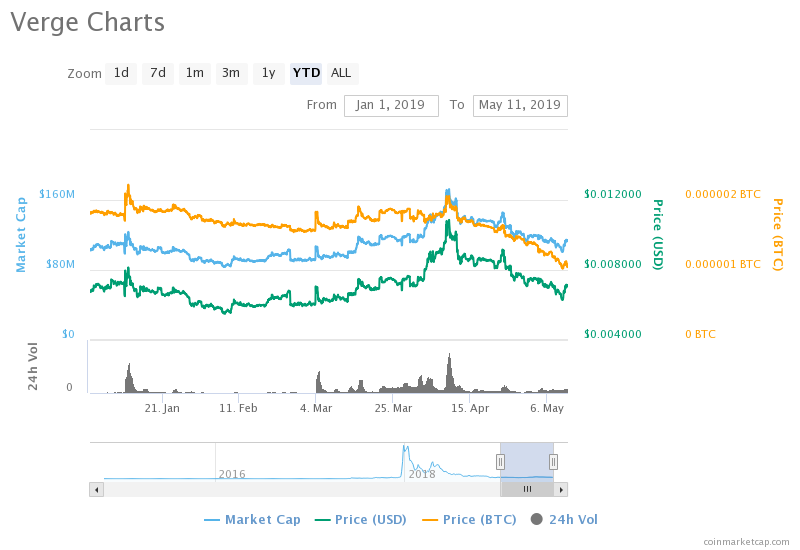 Verge (XVG) started the year with a relatively higher than conventional value. It got an abrupt growth right after the starting of the year on January 11th, but that momentum was lost soon. With a few price variations, the Verge coin managed to grow on a stable pace. But the highest and major growth was achieved after the 1st of April boom. However, the Verge coin has been going through price correction since then. The market cap on 11th April was 145,642,199 USD, and the value of each coin stood at 0.009171 USD and 0.00000176 BTC. The current market cap and value in USD is approximately 22% less than the values of last month.

As mentioned earlier, the iOS wallet has managed to attract much value to the coin. Along with this, there are other developments like Verge’s agreement with Netcent and its mention in the NASCAR series has played positively for the coin. As per our prediction, Verge (XVG) will have an up trending path now, and it will face one resistance at 0.0085 USD. By the end of 2019, the value should go past 0.01 USD, and it may even reach 0.025 USD level.

We advise potential investors to lock buying positions now. Holding for the long term is advised.