Verge (XVG) has recently touched the highest point of the year 2019 until now. It was being traded at 0.011 USD on 16th May, which is the highest point of the year. The upcoming Verge Meetup in Amsterdam will give some good signs for the XVG coin as there are multiple success stories of Verge holders lined up for discussions. Verge has recently released the iOS wallet for all Apple devices. These points have probably worked well for the coin. But, it is not yet clear whether Verge (XVG) can take advantage of the bullish trend. We predict the value of XVG coin to reach as high as 1 USD by the end of 2019. We should now analyze the current facts and figures. 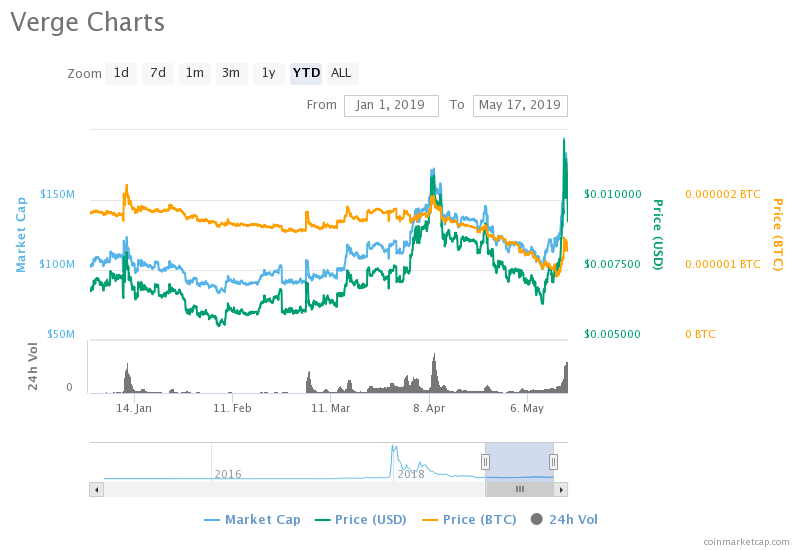 Verge coin has maintained almost a stable pace until now since the starting of the year. Yet, there have been many instances of steep rise and fall in this period. The second highest point of the coin was achieved at 0.010 USD on 09th April. The market cap on 17th April was 137,527,854 USD. And the value of each XVG coin was 0.008654 USD and 0.00000166 BTC. The current market cap and the value of XVG coin in USD are respectively 7.58% and 6.74% more than the figures for last month.

As mentioned earlier, the Verge coin has just reached the highest value of the year. We predict the coin to raise furthermore. The next resistance point will be there at 0.015 USD. By the end of this quarter, the value of XVG coin will reach 0.1 USD, and our 2019 prediction goes with 1 USD mark.

Buying fresh XVG coins for long term investment is advised. The long term holding until 2020 will give a huge profit over the current investment.

Coinbase Reveals Plans to Introduce Debit Card In US