Verge (XVG), initially known as DogecoinDark and launched in 2014, is an open-source privacy coin having a vast community of developers spread across all over the globe. The two main USP of Verge, aimed at providing anonymity to any transaction, is its obscurity tool Tor and an additional I2P layer. However, if you look at the recent market sentiments regarding Verge, it is almost on the lower side of the Bollinger chart. In recent times, the only good news that came for Verge (XVG) is the launch of its iOS wallet that is available to be downloaded for any apple device. In addition to that, the Verge team announced an upcoming meetup in Amsterdam on May 25th. Nevertheless, the meet is more about the investors that have been benefitted of XVG chips, rather than a conference focused on technology, science, and development. In addition to anonymity, speed of transaction is a major plus point for Verge (XVG). 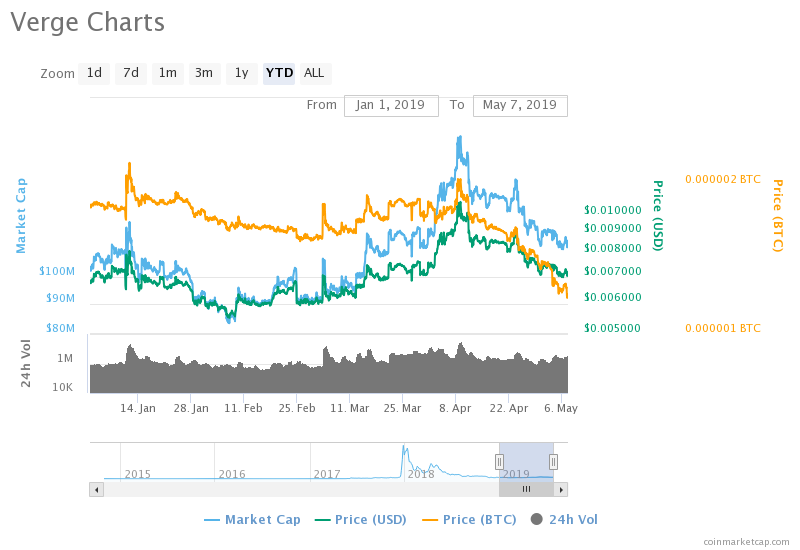 Just like the market movement and action in Bitcoin, Verge (XVG) is showing a bearish trend for now. Additionally, Verge (XVG) is similar or moreover like a twin sister to Tron (TRX) and both are having a bad time for about a year now. These facts can also be illustrated from the future predictions of many experts regarding the duo. As per crypto analysts, Verge (XVG) will have a longer bearish pattern than the whole market. At the time when most of the cryptos are making a breakthrough toward the upper end of the spectrum, something like that seems to be unprecedented in case of Verge. Nevertheless, some optimistic news also came from experts and they speculated that the listing of iOS wallet and returning to its core value will help Verge in strengthening the value of its currency by almost 2 to 3% by the end of 2019.