Verge is one of the stable cryptocurrencies that undergoes through fewer fluctuations in the great volatile market of the crypto sphere. It is a cryptocurrency that solely focuses on the privacy and anonymity of the users. It can thus facilitate instant anonymous transactions. It has an advanced blockchain technology built on the top of Tor and I2P. It has not yet implemented RSK technology; once it is done, it can offer smart contracts functionality too. It is a 100% open source project. 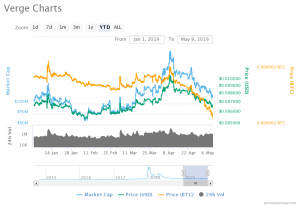 The above chart shows the following information-

In the last two weeks, Vet’s developers had been busy integrating RingCT. They also noted two major obstructing issues with their alpha codebase. The first issue is that they are not able to synchronize blocks/headers with any nodes. Due to falsely serialized headers, this bug caused the issue. And the other one is that transferring blocks was a blocking process for the old codebase used to check the validity of the block signature within those blocks. The second major issue is that Verge’s developers found out that miners are having problems while setting up a mining environment for improving the XVG’s performance and reducing obsolete blocks. They are currently focusing on improving these issues. Apart from this, they also had iOS wallet update with the release of Public Beta 4 of the iOS wallet. They are also working on android wallet update. Besides this, XVG has partnered with Trust.Zone VPN which according to the crypto enthusiasts, will lead to mass adoption of XVG. Accordingly, we think that XVG can be around 0.10 USD by the end of this year.

XVG is currently focusing on many updates. They are also doing well with their partnership programs. If the market volatility is reduced, that can greatly benefit the same with a persisting bullish trend. It is worth investing in this crypto.