CelsiusX aims to openly and effectively bridge the decentralized and centralized finance ecosystems. As part of Celsius’s DeFi division, the company is working on a scalable infrastructure that includes cross-chain token wrapping and bridging to increase crypto usefulness. In addition to this infrastructure, the prime focus is on building new use-cases for cryptos, enabling consumers to use new currencies by wrapping or bridging the technological gap. CelsiusX is also working with QiDao, a leading decentralized stablecoin platform on Polygon, to expand the scope of wrapped token applications and improve engagement of the QiDao and Celsius ecosystems.

Mai Finance is a non-custodial stablecoin system that collects MAI with significant collateral, and the procedure is worth well over $300 million at the moment. Mai Finance makes DeFi more accessible by offering zero-interest crypto lending, allowing users to borrow stablecoin (MAI) with no interest and no collateral. Visit here and get complete information about crypto loans or bitcoin loans. Mai Finance connects users to the QiDao Protocol, creating vaults where crypto assets may be collateralized and stablecoins can be borrowed.

Thanks to many feedback loops, MAI functions as a soft-peg directed to US dollars in a one-to-one ratio. Users will be able to engage in risk-free arbitrage since the value of 1 MAI deviates from $1, and the collateralization ratio ranges from 130 to 150 percent.

Curve, Quickswap, Balancer, and other partners are all compatible with the MAI token.

MAI is Polygon’s first protocol-based native stablecoin, and it is decentralized, autonomous, and community-governed. QiDao contains two tokens: MAI, the native protocol stablecoin, and Qi, which is the governance token that helps with proposal voting.

Overcollaterialized Vaults- The value of MAI stablecoins is determined by collateralized vaults. Instead of being an algorithmic system, QiDao is an overcollateralized stablecoin protocol, with issued MAI having a lower value than the supporting assets.

CelsiusX intends to increase the DeFi potential for the CeFi ecosystem as part of bridging. Existing users and holders of cxToken will benefit from CelsiusX’s partnership with QiDao.

CelsiusX plans to deploy three wrapped tokens, cxETH, cxDOGE, and cxADA, as part of its first launch strategy on the Polygon blockchain. These tokens are useful for collateralizing MAI minting in QiDao vaults, fostering the expansion of the MAI ecosystem, and generating more supply and stablecoin, which can then be utilized for work earning income in stablecoin liquidity pools.

Axelar Raises $35M to Reach a $1B Valuation for Its Network 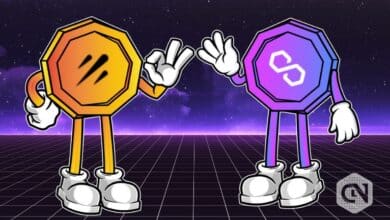