According to Google Trends, a number of US users search for the term “how to buy ripple.” So, apart from influencing financial institutions and banking industry, Ripple has stirred up common people in the US. Its number of investors are steadily increasing in the US for its ample benefits and security of cross border payments in its network. Ripple was released in 2012 as an iteration of Ripplepay. It is a real-time gross settlement system (RTGS), a remittance network and a currency exchange. It relies on a shared public database that use a consensus process to validate servers for ensuring integrity. Its token is represented as XRP. 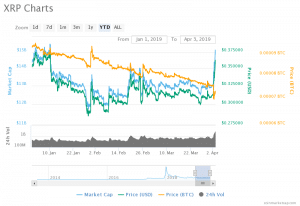 Recently, Japan’s MUFG bank has announced the signing of an MoU with Banco Bradesco, a Brazilian Banking Service. The MoU discussed a partnership between two companies for creating a cross border payment that will be powered by Ripple. Ripple is also expected to partner with Apple in 2019. So, it is pretty clear that not only, in the US, rather Ripple is getting recognized extravagantly globally for, it is all set to enter the gaming industry also.

Accordingly, Investing Haven thinks that due to these impressive developments, Ripple can be as high as $20 this year. The US Lifted predicted that by 2020, it can be around $22.79. Oracle Times assumed that XRP could spike as much as 2000% in the upcoming days. To be realistic, if Ripple can make the above advancements by 2019, then by the end of this year, it can be around $1.20 or can even be $2.

XRP is a very promising cryptocurrency in term of its performances and capacities. It is making steady developments in its network along with establishing eminent partnerships. So, it is expected that future days can be really bright for Ripple to be on a bull trend.

Verge (XVG) Price Analysis: Is Verge Going To Make Big In The First Quarter Of 2019?