Originally released as a subsequent iteration of Ripplepay in 2012, Ripple is a real-time gross settlement system, a remittance network, and currency exchange. It uses a common ledger managed by a network of independent validating servers which compare transaction records constantly. Ripple protocol enables instant and direct transfer of money between two parties. Its token is represented as XRP. 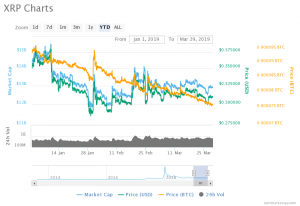 The collaboration with JP Morgan will have a significant impact on the value of XRP, as the xRapid features of Ripple have gained the attention of the largest investment bank in the world. Very recently, the official Treasury site of JP Morgan has announced that they are working on a real-time payment system that will have all the benefits of ripple to their clients. This announcement has undoubtedly ignited high hopes from the investors all around.

Apart from this, Ripple is more of a protocol than a cryptocurrency, and as DLT is expanding globally, Ripple will have high changes to spike up in future. It has partnered with Euro Exim Bank that uses Ripple’s xRapid service. Moreover, Ripple has a vast banking and financial network that has outreached to more than 150 clients all over the world.

With all these facts, Roman Guelfi, a respectable and eminent crypto enthusiast thinks that XRP is all set to achieve bigger milestones in the upcoming days. With these partnerships, XRP can surge up by $8-$ ten this year. Investing Haven assumes that XRP can even trade around $20 this year. UsLifted predicted that by 2020, XRP could reach $22.79 with a circulating supply of 38,739,145,924 XRP. Oracle Times has recently said that Ripple is all set to be the best choice for cross border payment by majority financial institutions in a global aspect.

Ripple’s performance has been high enough to impress its investors all around. Moreover, it caused a major boost in the cross border payments. With more and more eminent partnerships, it is gradually grabbing attention from major financial institution all over the world. So, investors depending on the volatility of the crypto market can consider spending on this crypto for a handsome return.