Ripple (XRP) released in 2012, is a real-time gross settlement system, currency exchange, and remittance network. It is built upon a distributed open source protocol and supports token representing fiat currency, cryptocurrency, commodities or other units of value such as frequent flier miles or mobile minutes. Banks and payment networks have adopted ripple as settlement infrastructure technology. Ripple relies on a commonly shared ledger, which is a distributed database storing information about all Ripple accounts. 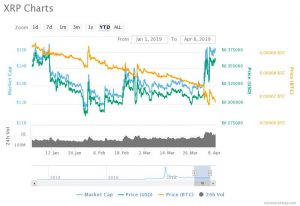 Current Statistics at a Glance:

As per the data and chart by the Coinmarketcap on April 8 at 7:03 UTC, the current stats for Ripple (XRP) is as follows:

Based on the above chart by Coinmarketcap, it is evident that XRP is ranked on the 3rd position giving almost a neck-to-neck competition to the very famous Bitcoin (BTC). During the start of this year 2019, XRP was very moderate which was then observed to be decreasing gradually. Until a surge was observed in the crypto market for all the coins to attain the peak prices, it was then when XRP regained its rhythm and had a bullish trend maintaining its rank and the position in the market. It was since April 01st that the price (USD) started showing an up-trend with an increasing rate. Considering the statistics till March 31st, the price (USD) 0.308574 with the current trading price of XRP, it is 18.32% higher. The growth observed in the last seven days has not been observant in a while for now.

The crypto bulls for XRP overpower the market making it rank amongst the best of the coins from the crypto market. This has lead to increased competition and challenges for the coin to maintain the position and increase the amount of investment in the pockets of potential investors. The bulls now attained will be soon taking XRP to new heights.