Ripple (XRP) works as both- a cryptocurrency and a digital payment network for online financial transactions. Ripple operates on an open source and decentralized peer-to-peer platform that allows for a seamless transfer of revenue in any form. The digital currency, XRP acts as a bridge to other currencies, because it does not discriminate between the types of currency (Fiat/Crypto) and hence makes exchanging a lot easier. The Ripple platform has its own protocol which is based on a shared database or ledger that uses the consensus process, which makes exchanges, transactions, and payments of money in a distributed process. The major advantage is the mathematical algorithms and a cryptocurrency that obeys fixed rules, which makes Ripple more secure and reliable. 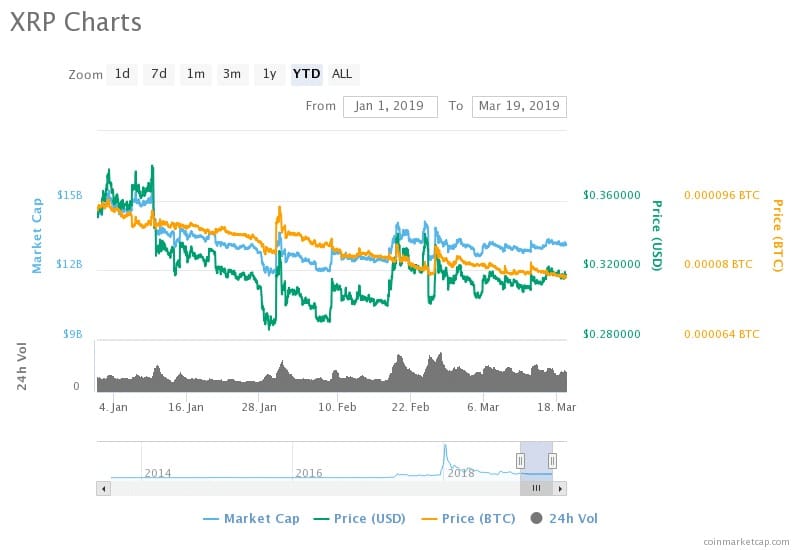 XRP is the 3rd largest cryptocurrency in the market, based on the reports from CoinMarkCap. The Mcap value of the currency is currently trading at $13,143,632,433 USD for its corresponding 24h volume of $646,697,327 on March 19 at 15:39 UTC. The MCap value has been range bound, and the values have maintained around 14 billion USD. However, there are high and low values that exceed the trend. This is due to the volatility of the cryptocoin. The value reached its all-time low of $11,953,997,631 on February 08 which is 9.95% lower than the current value. The numbers began to increase gradually and reached a peak of USD 14,054,770,034, 17.57% increase from its lowest. Currently, the overall market has been stable with negligible variations. The 20-day Exponential Moving Average shows the neutrality with negligible percentage difference. The current value is 0.14% higher than the value on February 27. The bulls rule the overall market.

CoinMarketCap analyses the pricing moments of XRP. The stats deduce the current price values of both USD and BTC- $0.317233 and 0.00007852 respectively. The MCap/USD pair has seen similar fluctuations after the split in January 2019. Hence, the price of USD reached both, its all-time low and high, along with MCap value, on February 08 and 19 with the values of $0.290363 and $0.341068. The current value is the intermediate between the low and high and with different percentages of 9.25% and 7.51% respectively. The cryptocurrency reached its milestone with the increase in the price of USD from $0.300777 on February 17 to $0.341068 on February 19, a 13.40 growth in 02 days. In comparison to MCap/USD pair, the price of BTC started high, and the market trend has been going downtrend after that. Bitcoin’s price opened as high as 0.00009398 at the beginning of January and has reached the lowest price with the current value of 0.00007852 on March 19 at 15:39 UTC. The percentage difference of 19.69% displays the trend going downhill concerning BTC’s price.

The 14-day also exhibits the neutrality of the cryptocurrency with a minute increase from $13,024,573,749 on March 05 and an average difference of 0.91%. The moving averages and the overall market trend are in support of the bullish pressure. Hence the balance points in favor of the buyers especially concerning long term investments. The investors will receive huge benefits with this current market trend. However, traders with short term investments will have to sideline. The neutrality of the market is not in support of their contributions.