Ripple (XRP) is a technology that works as both- a cryptocurrency and a digital payment network for online financial transactions. Ripple is the 3rd largest currency after Bitcoin and Ethereum, and it operates on an open source and decentralized peer-to-peer platform that allows for a seamless transfer of revenue in any form – any fiat currency or any cryptocurrency. The Ripple platform does not work on PoW or PoS consensus algorithm. Instead, it has its protocol which is based on a shared database or ledger that uses the consensus process. The major advantage is the mathematical algorithms and a cryptocurrency that obeys fixed rules, which makes Ripple more secure and reliable. 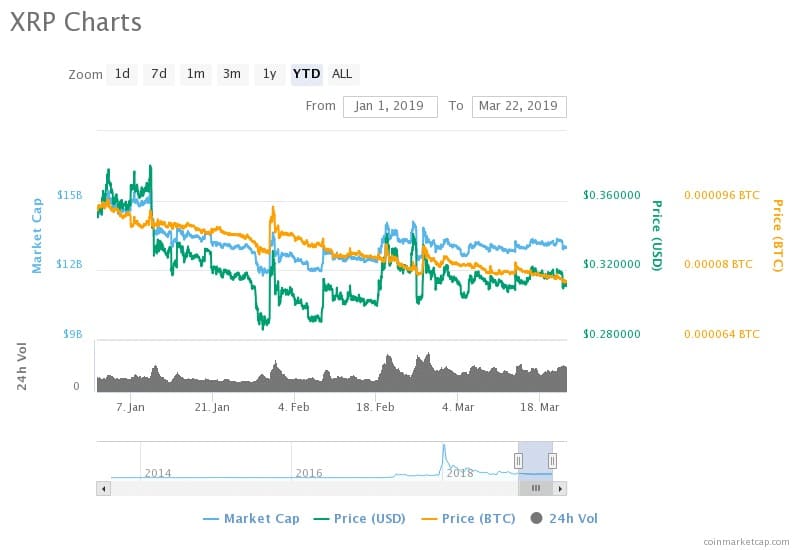 Ripple (XRP) is the 3rd largest currency in the crypto market according to stats from CoinMarkCap. The market cap value of this cryptocurrency is $12,963,832,945 USD for the 24h volume of $807,255,143 on March 22 at 13:04 UTC. The mcap value of this cryptocurrency traded at 14 billion USD at the beginning of January, reaching its highest on January 10 crossing 15 Billion USD.  However, the market started going downtrend post it’s an all-time high. It reached its lowest on February 07 with the value of USD 11,964,335,127 which is 8.35% lower than the current value. Nevertheless, the volatility of the cryptocurrency caused major variations in the MCap Values. The 20-day EMA exhibits a downtrend with the values decreasing from $13,038,318,628 on March 02 to the current value with a 0.57% decrease. The overall market is pushed down by the bearish pressure.

CoinMarketCap has also been observing the prices of USD and BTC along with the MCap values. The present-day price of BTC and USD are 0.00007733 and $0.311137 respectively at 13:04 UTC. Stats show that, although the market cap value and the price of USD have been on a similar wave with the ups and downs in the same period, the price of USD has dipped very low from its peak price of $0.290614 on February 07 at 02:34 to the current value by 7.06%.  However, the cryptocurrency reached its milestone between February 18 and 24 when the price of USD hiked from $0.300184 to $0.341000, an increase of 13.60%, in a short span of 06 days. The price of BTC has been on the downtrend, and it hasn’t joined the MCap’s gain. The analysis shows that BTC had dropped from an all-time high of 0.00009467 on January 31. Anyway, the high values did not sustain for long and have been on a downtrend reaching its lowest 0.00007733 – present-day value, which is lower by 18.32%. However, the MCap value of the cryptocurrency surpassed the bitcoin’s value with its current value.

The 14-day moving average shows values ascending from USD 12,953,328,879 on March 08 to current value with a 0.08% negligible percentage. Both the percentages of the moving averages show the downfall of the market, hence pointing the market balance in favor of sellers. Hence, any investors with long term investment plans should observe the market trend before taking a step further. However, the current market looks advantageous for the traders due to the high fluctuations. They will receive high benefits for short term investments, and their contribution will increase the value of the crypto-coin and stabilize it in the future.

XRP Draws a Downtrend and Has Pulled Back Over 28%

XRP Breaches 5-Month Resistance at the Onset of the Month