Ripple’s solutions are superior enough to impact financial institutions globally positively. This is the reason why the majority of these organizations are really eager to use XRP, the native coin of the Ripple’s network. XRP is the sole digital asset that is specifically designed for payment providers and financial institutions. It is the most scalable digital asset and acts as a bridge between fiat currencies. It provides smooth cheaper, faster and reliable cross border payments. It even scales faster than BTC and is fully secured. It incepted in 2017, with a value of $0.006 and then, it surged up to $3.60 in January 2018- this major upturn proves the ability of XRP, and thus, it is regarded as one of the valuable start-ups in the US, just after Airbnb, Uber, WeWork and Palantir. 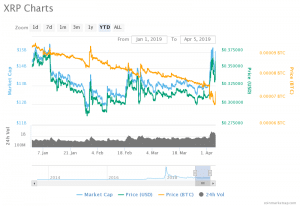 Ripple has been more or less stable these days. It is holding a clear objective since the past few years to replace SWIFT as the most dominant cross border payment system in the world. Ripple’s developers have successfully launched xRapid, xCurrent and others and these are already providing much ease to banks and other financial organizations for making cross border payments. XRP has already started progress in its bid, and various commercial entities remain hooked to use this currency and its network. Moreover, banks are showing great interests in the blockchain technology, and if possible enough, they are also opting to issue a CBDC- Central Bank Digital Currency. So, all these are creating massive opportunities for Ripple to get up as high as possible in its upcoming days.

Considering the above facts, Investing Haven believes that XRP can be as high as $20 by 2019 end as it has many potentials compared to any other relevant cryptos. USLifted assumed that by 2020, XRP could spike up to $22.79. Oracle Times predicted that XRP could surge up to 2000% in a year if it can be the most dominant network for cross border payments. To be very realistic, we think that Ripple can completely replace SWIFT, but that will take a little more time. They need to be more promising followed by mass adoption. Definitely, it will tend to be on a bull trend in the future and this year, it can even reach $2.

Ripple is a great cryptocurrency with much potentials and benefits. It is worth investing in this crypto for higher returns.

What does the Future Predict for Ripple (XRP) Token?