Ripple (XRP) is a creation of Ripple Labs Inc. It is an independent digital currency based on Ripple Consensus Ledger. It facilitates the fastest transfer of values, and it has the aim of becoming reachable to every corner of the globe with its financial system. It offers a real-time gross settlement system, currency exchange, and remittance network. Its distributed open source protocol maintains complete anonymity of the users and helps to represent fiat currency, cryptocurrency, and commodities. 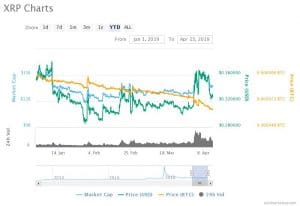 This year Ripple (XRP) has not performed as per the expectations. With lots of variations in the pricing, the coin finally gained its momentum for a short time after April 1st. Though the coin started at a higher price, it could not sustain once it touched the restraint 0.36 USD.  It even touched as low as 0.29 USD by the end of January. Anyways, the current downward movement since the last two days will not be there for a longer period. It will rise again up to 0.35 USD level to find another resistance point. But on the medium term, the coin is likely to touch 0.45 USD by the end of this quarter. The short term outlook makes now a perfect time to lock in a buying stand. Long term outlook seems promising. Experts have predicted the coin to outperform many major coins in the market by 2020.

VeChain Teams up With Adidas, SBTG And Game Of Thrones, To provide NFC Chips To Help Making GoT Themed Sneakers

Bitcoin: The Price is Making a Revival - Will it Last?