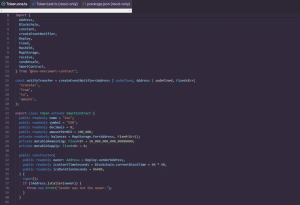 The all in One dApp development Suite- Neo-ONE, by Alex DiCarlo, is here to allow the users to make their dApps on the NEO platform. It is an end to end smart contract framework. DiCarlo leads the team of five people that work on the NEO blockchain explorer called the NEO Tracker. The team is also responsible for TypeScript based contract development. Also, the platform is also targeting to make the learning process simple and effective with its documentation and course material. In DiCarlo’s words-

“The first inklings of a framework began when we needed a way to track token transfers as well as have a fluent API for efficiently interacting with a NEO node. Once we had built all of the infrastructure and APIs needed for NEO Tracker, we felt that we had made something useful that others could leverage, so we started on the track of fleshing out the details of an end-to-end framework that would become NEO-ONE. […] Further the team offers- “effortless startup and empowering users with tooling every step of the way. […] Ultimately, our goal is that someone with zero NEO experience, and even zero blockchain experience, can get up and running with their first smart contract in 30 minutes or less.” 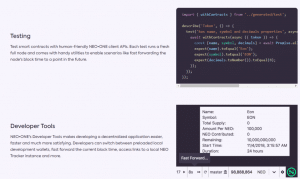 The NEO framework focuses on easy access for the users and to offers them an environment where they can freely test and code in the browser without depending on a separate environment. You will get console.log that is in perfect synch with smart contracts and JavaScript. And to tackle any potential issues, the team plans to offer integrated debugger. Additionally, you can also integrate NEO-ONE CLI into the Atom or VSCode editors. For dApps enthusiasts, the platform is offering you the freedom to automate testing by writing TypeScript unit tests. For the future growth of NEO-ONE, DiCarlo has this to say-

“By making blockchain development a seamless and easy process, we hope to have an impact on the crypto ecosystem as a whole – if developers have to spend less time thinking about their smart contracts and how to integrate them, we hope that they will have more time to spend on the user experience of their dApp. […] For example, NEO-ONE drastically simplifies the process of setting up a local node, it just requires node installed and otherwise is a single command. […] Everything from smart contract development, testing, local network management, client APIs for interacting with smart contracts and integrations with frameworks like React have been meticulously thought out and integrated to provide a development experience that no other framework, in NEO or any other blockchain, can provide.” 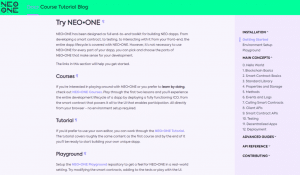 NEO-ONE comes with the support of TypeScript that enables the users to write smart contracts on the platform while allowing JavaScript for interaction. On this DiCarlo said-

“We wanted to use a statically typed language for all the compile-time benefits it brings; without even running the code we can enforce invariants and ensure that it is correct. Given JavaScript’s popularity and TypeScript’s rise to fame within the JavaScript world, TypeScript seemed like an obvious choice for building a new framework that necessitates correct code – we are dealing with financial transactions after all. The future aims of the team are too- “extend the end-to-end capabilities to other smart contract languages so that developers can use whatever they’re most comfortable with and still take advantage of NEO-ONE.”

Onboarding new developers on the platform-

NEO-ONE seeks to cater to all categories of developers. With its learning course material, the platform aims to help the beginner builders to be able to create, test and write smart contracts straight from the browser. This will also make the dApps development process less complicated. On this DiCarlo further added-

“Somewhere in between. We walk through all of the concepts, including the non-blockchain concepts, as if the developer has no experience. We provide external documentation links throughout the material to the more detailed NEO-ONE documentation on the subject at hand, to the TypeScript documentation for TypeScript specific knowledge as well as to any external library that we are using during the course.”

The team is open for feedbacks for future growth-

DiCarlo invites and welcomes an extensive use of the framework, sieve out bugs, any issues to iron out the functioning of the platform. He further added-

“We want to make this the best framework out there, and the only way that we can do that is with community help. Beyond that, we have a laundry list of issues at the neo-one GitHub that could use help, and once you’ve gotten a feel for developing on neo-one, there are larger things that we need help with. For example, we have a strong integration story with React both from a developer perspective and from integrating for production, and we’d like to extend that to Angular, Vue, and any other framework that developers use for front-end development.”

Support Needed in Disposing of the Seized Bitcoin (BTC) : The US Marshals Service