In a recent announcement, the NEM Foundation has announced about the forthcoming shifts the company is planning to take on. In the forum, the NEM Secretarial Office on behalf of NEM Foundation pointed at the resting and re-launching of the Foundation.

Sticking to the core values of the company, the announcement talked about several sensitive issues that have been affecting the progress of the company, loopholes in the organizational structure and other financial issues. On the onset of this New Year, after a financial audit, issues such as the company is currently functioning at low XEM and fiat funds, surfaced. The situation was so bad; the foundation could only run for the next 30 days if the current reserve were to be considered.

The announcement on the forum leads to a lot of questions and anxiety in the investors’ minds. To give some perspective, the President of NEM Foundation- Alexandra Tinsman said-

“Please know I understand how confusing things look and we are working to communicate all information to you and the community promptly. Part of this means we have to take extra steps to ensure we are legally and correctly sharing information- this takes time to do.”

The ‘out of the box’ blockchain platform- NEM Foundation-

NEM council elections ask for a special requirement from the voters to become eligible. According to Cointelegraph, the first eligibility criterion is that the person should be at least 21 or above 21 years of age. The second criterion is that the person needs to pay an annual membership fee of $50 for individuals, $500 for corporations who have less than 25 employees, and $1000 for corporations that have 25 or more than 25 employees. The third criterion is to comply with KYC (Know Your Customer) requirements.

As per the Interim President Kristof Van de Reck, the election was not a smooth election, because only two hundred two membership accounts passed the eligibility criteria. But out of those two hundred two eligible voters, only one hundred forty-eight were able to vote. Why? Some reasons behind the failure were like- firstly some of the accounts could not pass the KYC requirements, secondly some got failed due to human error, thirdly some faced issues from the registration site that could not accept the new membership application sign-ups, fourthly the NEM Medium account was taken off in the middle of the voting procedures, and lastly some members were forced to vote manually due to the problems related to the Ledger Nano wallet.

The current president of the company had over and overemphasized that the NEM Foundation functions as a separate entity to the NEM blockchain platform. But still, a different story gets projected by the actions of the foundation, which puts an impact on the XEM prices. On the forum, one of the community member- Dan_V said that he understands that the Foundation is not NEM, but still the foundations ‘seems to have an uncanny ability to cripple most parts of it.’ He further stated that the probable reasons could be ‘infighting, unprofessional behavior by representatives of the council or just lack of direction for NEM as a whole.’ As per the reports obtained from Cointelegraph, the announcement created a whole of 65 million U.S. Dollars within 24 hours time span from the XEM market cap. The announcement was made on 31st Jan 2019.

The big impact of the NEM announcement-

“When the new council arrived on January 1, 2019, we opened the books and saw the results of 2018. We saw a lot of talented people who were working hard, but not aligned with the same goals. We saw efforts being duplicated, and inconsistent metrics of success. We saw very little accountability for funds and questionable ROI, leading to a burn rate of 9 million XEM per month. In terms of running an effective organization, the existing structure failed. Maybe that didn’t seem like a big problem when the XEM price was high, but it’s a very big problem as we seek to sustain a viable organization in the ‘Crypto Winter.’

A result of all these issues gave a loss of 9 million XEM per month, which is almost equal to $350K. The bear tendency of the crypto market also dearly charged that foundation. Billions of dollars were lost since January last year.

On the other hand, the community members had quite a different reaction to this financial challenge. One of the community member with the profile name- ‘Jelin1984’ blamed the prior president of the foundation and the co-founder of the NEM Foundation for constructing another crypto project called- ‘ProximaX.’

“Lon left the NEM Foundation in April 2018. Since that time he has been focusing on a project called- ‘ProximaX,’ in which he is the President. The NEM Foundation wishes Lon and ProximaX success in the future.”

As an answer to such acquisitions, Wong said that while he was serving as the President of the Foundation, he along with the rest of the NEM Foundation Council ‘managed the funds prudently.’ He further added that the company requested for the fifty percent of the funds. These funds were approved for spending them for 2017.

On the other hand, the current president of the foundation handled the acquisition on the forum itself when he said-

“No one is accusing Lon of taking funds. Please do not spread this misinformation. Lon Wong was a co-founder and the first President of the NEM Foundation which started in early 2017, two years after the launch of NEM.”

The community forum seemed to be on fire for acquisitions when another member of the community- ‘Jleony’ accused the NEM employees of using the funds of the company for the ‘personal enjoyment and profit.’ He further added that there is no regard for the success of the project. To this, the current president of NEM Foundation said-

“Hi, this is not true. No one was using the funds for personal enjoyment. There were not effective policies put in place in 2017 and 2018 that captured all data spend BUT from the records we do have; we can see that the funding was mainly spent on marketing, event, salaries, travel, and training. We have shared complete transparency with the devs on all the auditing from 2018. This is why the new NEM Foundation to restructure was immediately put into place. The new policies and moving to a product-focused structure offers complete transparency to the community on how will be spent and allocated.”

The announcement by the NEM Foundation says that the financial issue can be overcome and can be fixed. To do this, there is a special mention of the measures that can be taken. An excerpt from the announcement reads as-

“We are optimistic about the future of the NEM Foundation under its new council. With a laser-focus on our mission-critical goals, we are positioned to remain an industry leader through this ‘Crypto Winter.’ The upcoming launch of Catapult will revolutionize blockchain’s future, and we are grateful for your support in the next steps of this journey. Expect to see us rise from the dust of this Crypto Winter and have a laser focus on our mission-critical goal which is the launch and commercialization of Catapult, our latest technology update that will revolutionize blockchain’s future.”

Further, the Foundation pointed at specifically three things that one can expect from the new NEM Foundation’s changes- 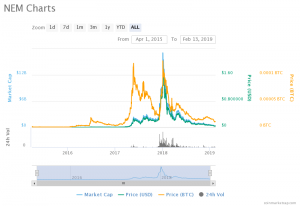 Further, these product heads have to report the ‘metrics and deliver ROI’ directly to the council and the community. Accounting standards will be followed. And the funds that are spent will be under the supervision of the head of finance CFO of the NEM Foundation. One can also expect some drastic budget cuts. The aim is to heal the 9 million XEM per month expenditure by at least 60 percent. This will be achieved by currently cutting all the partnerships and projects on hold. Also, there will be a ‘planned layoff’ of 150 staff members.

The Foundation aims to become a more traditional organization with a centralized business model which is driven by revenue and product development, as per the reports from Cointelegraph. The foundation wants to move away from the label of ‘driven promotional organization.’ There are some fundraising plans too to mend the funding gaps. The Foundations plans to ask its community to pitch in for the funding. The foundation aims to raise 160 million XEM which is almost equal to 6.2 million U.S. Dollars.

Further the current president of the foundation assured that as soon as the full report of the restructures and the funds which have been requested gets completed, it will be shared with the NEM community. It will be done after the ‘core developers, and the legal team reviews the proposals and the audits,’ as per the reports.

The announcement signed off with the following promise-

“We know the community has high expectations; we will work our best to meet these expectations to the best of our abilities. We have one final message for all. The NEM Foundation you knew before is gone. The new proposal will clearly outline a significantly new approach and mission. We exist to serve and support the community responsibly. We are a new, leaner, product-focused, revenue-driven, community-oriented organization. Thank you.”

Binance Coin BNB With Market Cap of $1.15 Billion Rises to The Top Ten