The crypto winter had its chilling effects on most of the cryptocurrencies, but Litecoin LTC managed to brave the blow. As per the data obtained from CoinMarketCap, the crypto-coin has rather been showing a great growth with its price getting doubled from $30.35 in January to $62.77 in March. 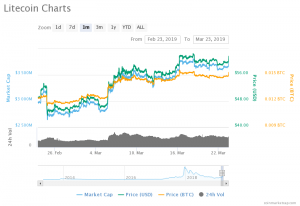 According to the industry report by SFOX- the prime dealer for large scale investors, there are five main reasons behind this growth-

With such intelligent moves combined with the vision of the company for becoming a smooth, global platform that enables the most efficient electronic cash transaction, LTC is bound to see further growths.

There has been substantial growth in merchant acceptance in the past few years, and thus the price of LTC has also got increased. On Feb 12th there was observed a special boost in the crypto coin’s price soon after ‘Spend’ a mobile app made an announcement on Twitter about LTC being available as a mode of payment method for over 40 M merchants on the international platform.

There has been a consistency in decreasing the transaction time which naturally makes LTTC a favorable trading platform. This year, especially the payments have become really fast and efficient thanks to the increase in the payment channels and the active nodes. Currently, the number of active nodes is about 175 nodes, whereas the number of payment channels has leaped from 300 in Jan to over 1100 in March.

On the other hand, the halving event which is scheduled for this year is another key factor that may result in more foot-fall for LTC. By August the mining incentive will go as low as 50 percent, which should further drop the rates at which new LTC will come into the market.

Also, the third key factor behind the magnificent growth of LTC is the lowering of transaction fees. This key factor has roped in a lot of merchants to LTC. There has been a 75 percent dip in the transaction fee in one year, as per the industry report by SFOX. Further in the report a probability of the launch of Litecoin Core 0.17.1. The release should further decrease the fees by ten times.

The promise of greater privacy on the platform is another factor which is attracting the merchants to invest in LTC. As per the reports from Forbes, back in January the creator of LTC- Charlie Lee credited “fungibility” as the key factor for good money. He pointed out that this factor has been missing from both BTC and LTC. He further added that he is targeting to make LTC more fungible with the help of adding “Confidential Transactions.”

Last month LTC Foundation announced its plans work with Beam to implement ‘Mimblewimble’- a protocol that will make the LTC transactions absolutely private.