STEEM is a network that assists blockchain in reaching the social media platform and also hosts Steemit’s social and blogging sites. STEEM is operated on Smart Media Token Protocol which is developed by Steemit. It is quite advantageous to the users because it uses Proof-of-Brain algorithm where the users can create and make changes to the content and earn tokens in the form of STEEM. Corporates also utilize this platform to advertise themselves and simultaneously, earn from it. 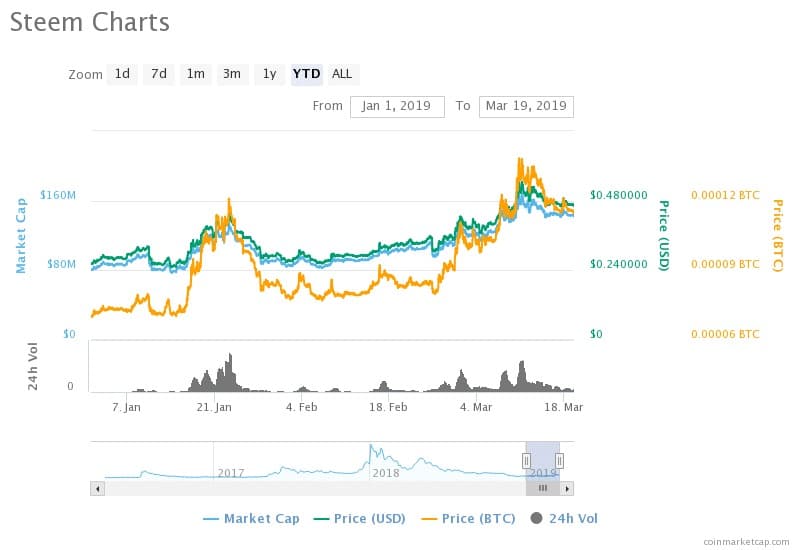 Based on the reports from CoinMarketCap, STEEM is the 45th largest cryptocurrency in the market with its market cap value trading at USD 142,210,624 on March 19 at 12:09 USD which is relatively higher by 39.22% from the value of USD 102,149,482 on  February 19 at 07:34 UTC. The market value started at USD 80 million and had been range bound to USD 130 million until January 23. However, the market had been on a downtrend for the period between January 25 and February 27, with its recent low on February 25 of USD 96,427,218, 47.48% lower than the current value. The overall market bounced up and has been on an uptrend with inconsequential lows. The market value reached it’s highest recently on March 11 with its MCap value – USD 167,445,663. However, the current value shows a minor setback of 15.07% drop since then. The 20-day Exponential Moving Average also shows that the market is an uptrend, with its values rising from USD 112,017,861 on February 27 to the current value by a noticeable 26.95%. This significant growth pushes the digital currency into bullish pressure.

The 14-day Moving Average of this digital currency also exhibits an uptrend with Mcap value increasing from $124,244,553 on March 05 to the current value by 14.46%. With both the percentages of the moving averages rising and the bullish market, traders can invest in this cryptocurrency to keep the market uptrend and be the receiver of good profits in the future. Since, the market balance rests in favor of a strong buy, long term investment by the investors on STEEM would be returning higher benefits for a long time in the future.