Steem is a social blockchain that owns and grows communities. STEEM represents a fusion of ideas, drawing from both social media and cryptocurrencies to create a new kind of platform. It also powers real applications through its a social app called Steemit. It uses the proof of brain algorithm which allows the users to edit the content and the features, based on the quality and the functioning capacity; the users are rewarded with STEEM coins. It makes revenue flow possible for users with this rewards – The greater the contribution, the more tokens they earn. The major advantage of this cryptocurrency is that it can be used in the non-digital world as well. 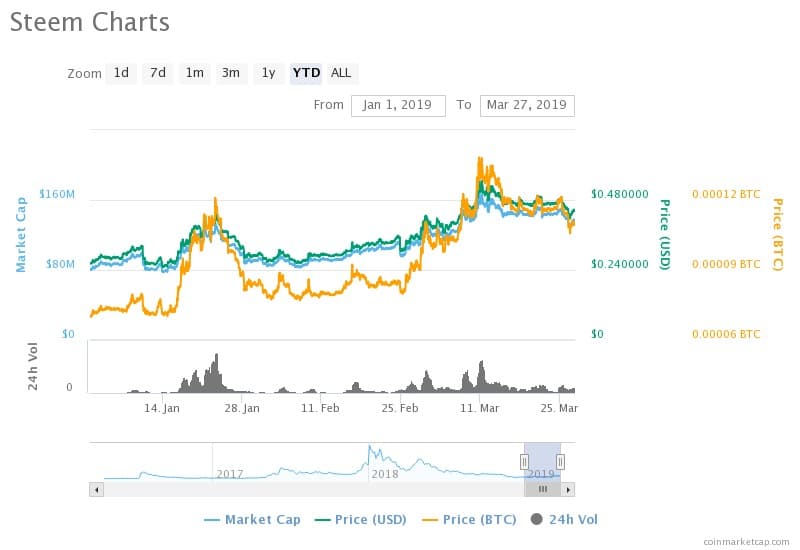 Future of STEEM is predicted to be bright and advantageous. Crypto Ground estimates that there would be a hike percentage of 219.93% and the current price would bounce to 1.4065 USD by the beginning of 2020. It also predicts that the cryptocurrency would be on a continual growth with an increasing percentage of 1,427.72% and a rise in price by 6.7161 USD. Predictions from Trading Beasts suggests that the trading value of the currency would increase by 293.06% reaching 1.73 USD by the end of 2019 and as for long term, the percentage increase nears 450% and the trading price hikes to 2.46 USD on an average. Contradicting to the growth analysis is the technical analysis by wallet investor. The analysis predicts that the market is in for a set back by the end of 2019. The current price is expected to degrade by 269% and reach 0.142 USD.

However, the current market does not support the predictions due to the dipping values. The bears pressure the crypto-coin and hence do not cooperate with buyers. This crypto’s market does not satisfy the requirements of the merchants and investors. The prediction foresees STEEM’s bright future. However, the cryptocurrency will rise in value and benefit only from the investors – both long term and short term. And a stable increase in the market trend will support such investments.