Steemit (STEEM) is a blockchain backed crypto coin with a special focus on online content creation. Steemit coin can also be traded on an app called Steemit. It gives rewards to the content creators with respect to the quality of the content. It was set up on 2016 by Ned Scott and BitShares creator Dan Larimer. Steemit coin relies on the delegated proof of stake algorithm. Recently Russian major media house has officially started posingSteem blockchain platform. 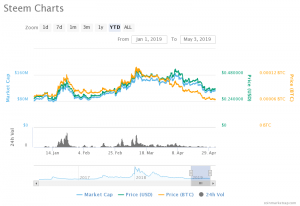 Steemit (STEEM) coin has shown stable growth over the last 4 months. In the 1st fortnight in January, it gained momentum and hiked by almost 60% in a week’s time. The momentum was soon lost and in a few instances, the coin experienced a steep fall. However, the stable uptrend was seen after 1st April market boom. This boom gave a push the coin to 0.5 USD level. The market cap on 3rd April was 156,987,138 USD. And the value of each token was 0.510759 USD. The current market cap is 28.55 % less than the market cap of 3rd April. And the value of each token has decreased by 30.92 % in these 30 days.

As reported earlier, the value of each Steem token is now roaming around 0.34 USD level. And it is going through the price correction stage. We predict the coin to reach 0.29 USD in the coming few weeks. After this fall, the value will rise again. The next resistance level can be encountered around 0.41 USD, 0.48 USD, and 0.51 USD. The long term outlook, as well as the medium-term outlook, is bullish.

We advise the speculators not to venture into Steemit coin now. The price will be tilting for many times in the current month. Investors are advised to hold their coins keeping an eye on the resistance levels given. This will help them get a huge profit over their investment.