STEEM represents a fusion of ideas, drawing from both social media and cryptocurrencies to create a new kind of platform. Any user is allowed to create, share and upvote contents on the STEEM network which earns them STEEM cryptocurrency tokens based on the performance within the community. It hosts most of Steemit’s social and blogging sites. STEEM’s network established a connection between blockchain and the social media platform. Steemit developed a protocol called Smart Media Token which is the basis for STEEM’s operation. It uses the proof of brain algorithm which allows the users to edit the content and the features, based on the quality and the functioning capacity; the users are rewarded with STEEM coins. The greater the contribution from the user, the more tokens they earn.

There is no limit for the mining of STEEM coins; they grow by 100% every year. The major advantage of this cryptocurrency is that it can be used in the non-digital word as well. It can also be exchanged to fiat currencies. There is no mining of STEEM coins, they can either be bought using Fiat currencies from major exchanges, or it can be exchanged with another crypto like Bitcoin and Ethereum. 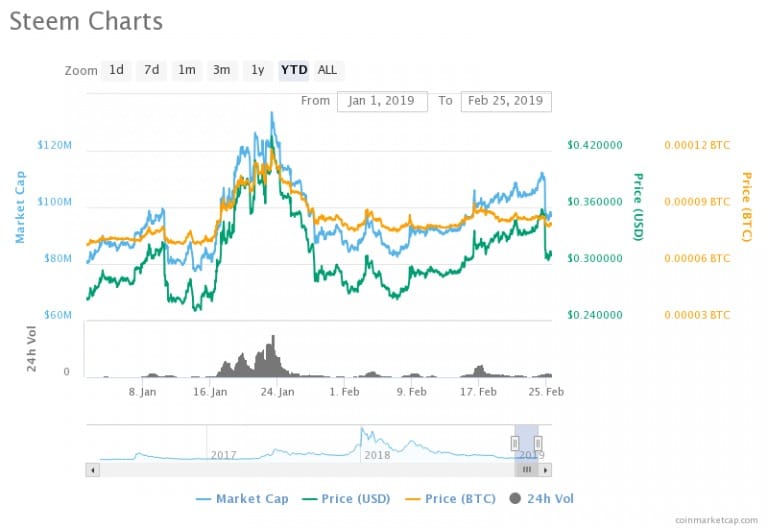 According to the stats from coinmarketcap, STEEM is ranked as the 48th largest cryptocurrency in the market, and its market cap value is USD 97,015,251 as on 25 February 2019 at 14:54 UTC. This is based on its circulating supply of 313,734,190 STEEM out of a total supply of 330,708,284 STEEM. The exchange price for the digital currency is 0.309228. Its current value has increased by 15.57 percentage compared to the MCap value as on February 07, where the market cap value hit the lowest from the beginning of this year. The values have been wavering drastically over months. However, the cryptocurrency saw its all-time high on January 23, where its MCap value hit USD 133,613,214. The numbers have been dropping ever since.

Nevertheless, the 20-day EMA shows a positive sign. There has been a notable rise in the MCap value of 13.00% between the current value and the value on February 05 2019 at 22:34 UTC. The 14-day average is also in sync with a rise of 12.90% in the MCap value from February 11th. Since the moving averages are on an uptrend currently, the bulls have the upper hand.

Since both the averages are moderate, results show that the market balance is tilted in favor of sellers. Hence, for any term investments, the investors and the traders will have to observe the market trend’s stability. This analysis must have boosted the traders and investors to invest more in this cryptocurrency, hence increasing its value further, which works more advantageous for STEEM.

Is Dogecoin out of its Short-Term Downward Trend?