The Stellar network is a blockchain based distributed ledger network which connects financial sectors, payment systems and people which facilitates low-cost cross-asset transfers of value. Stellar’s cryptocurrency is called Lumens and id denoted with symbol XLM. Stellar is operated by a non-profit organization and was introduced as a cross border transfer and payment system that connects financial entities. Each transaction is charged a standard fee of 0.00001 lumens. Its primary focus is on developing economies in remittances and bank loans especially for those who are outside the scope of banking services. 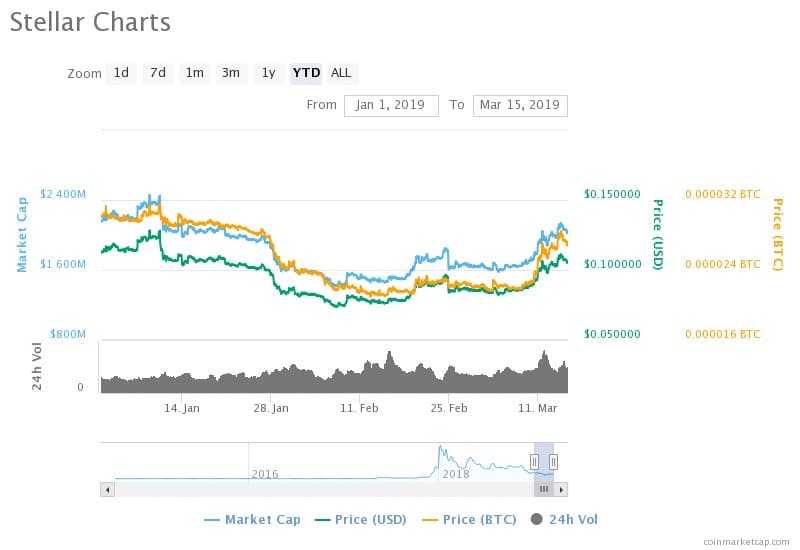 According to reports from Coinmarketcap, the market cap value of Stellar (XLM) as on March 15 at 15:04 UTC is USD 2,024,391,038. The corresponding price of XLM/USD pair and XLM/BTC pair are USD 0.105341 and 0.00002691 respectively. It is the 8th largest cryptocurrency in the market. The markcap value has been on a swing but majorly on the downtrend. The market Cap traded at 2000 million USD at the beginning of January and down drifted ever since. The reduction in values prevailed until February 19, reaching its lowest of USD 1,412,896,658 on February 07 at 02:34 UTC which is 43.28% lower than the current value. There was an elevated percentage value of 50.71% between February 07 and March 14 when the numbers rose from the all-time low to its all-time high of USD 2,129,397,280 at 23:39 UTC. The cryptocurrency’s MCap value has been on a significant increase with inconsequential dips. The Market Cap value shows a significant increase with the 14-day moving average with the values increasing from $1,659,845,686 on March 01 to the current value with 21.96% growth. The inclinations in values show that the market has been under the bullish pressure.

The rise in values has been pivotal. The MCap/USD pair has been on the lead followed by the price of BTC. An analysis shows that the price of BTC had dropped from an all-time high of 0.00002836 on March 14, 2019. The high values did not sustain for long and have been on a downtrend reaching its lowest on February 07 with a value of 0.00002173, a 23.38% decrease. The values rose to the current value, with a percentage rise of 23.84 and have been significant. However, the MCap value of the cryptocurrency surpassed the bitcoin’s value after overlapping on February 08 and has been stable. The MCap/USD of Stellar reached its all-time high on March 14, when MCap value reached its high of USD 1,659,845,686 at its peak price of USD 0.110816, 5.20% higher than the current value. Nevertheless, the milestone XLM achieved was proved in February when it rallied from a low of $0.080080 on February 18 to a high of $0.096577 on February 24, which is 20.60% increase within a short time of 6 days.

The 20-day EMA shows that the current market is on the uptrend concerning MCap value. The moving averages and the overall market are on the uptrend. This points the balance in favors of buyers. Hence Investors with long term investments would find it suitable to invest in this cryptocurrency. Traders can also earn a profit from their transactions due to the rising market. Investment from traders will increase the value of the cryptocurrency in the future.