STEEM- it is a blockchain network that hosts Steemit’s social and blogging sites. With STEEM’s network, blockchain has reached a social media platform. STEEM is a platform where social network’s content is designed and formed. STEEM is about to expand the accessibility and decentralize social networks by transferring revenue to users from the advertisers. The users are paid for their contribution to the website. STEEM was created in 2016. There are two other digital currencies in the network apart from STEEM – Steem Power and Steem Dollars.

STEEM is operated on Smart Media Token Protocol which is developed by Steemit. It is quite advantageous to the users because it uses Proof-of-Brain algorithm where the users can create and make changes to the content and earn tokens in the form of STEEM. The reward is deduced with the value of the content from the user. More the contribution from the individual, the more tokens they earn. It also rewards the users for voting and commenting on certain blogs and articles. Corporates also utilize this platform to advertise themselves and simultaneously, earn from it. Every year, the number of STEEM coins grow by 100%. Hence, there is no limit to the number of coins. This digital currency can be exchanged to fiat currencies and can be utilized in the non-digital world as well. STEEM coins are not mined like Bitcoin or other cryptocurrencies. It can be bought using Fiat currencies from major exchanges or can be exchanged with other crypto tokens like Bitcoin and Ethereum. 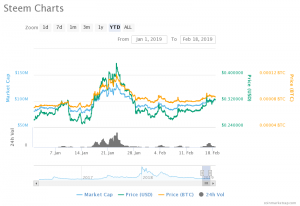 According to the stats from Coinmarketcap, STEEM has moved up from 50 to being the 47th largest cryptocurrency since December 2018. Its market cap value is $102,828,858 USD as on 18 February 2019 at 10:24 UTC. This is based on its circulating supply of 314,854,917 STEEM out of a total supply of 331,829,011 STEEM. The exchange price for the digital currency is 0.326592 USD. Its current value has declined by 41 percent compared to the MCap value as on November 18. The values have been wavering drastically over months. However, the cryptocurrency saw its all-time high in April last year, where its MCap value hit 1,079,330,048. The numbers have been dropping ever since. Compared to the value with the past year, the rise in numbers in recent time has been insignificant.

Nevertheless, the 20-day EMA shows a positive sign. There has been a notable rise in the MCap value of 13.49% between the current value and the value on January 29, 2019, at 19:44 UTC. Since the moving average is on an uptrend currently, the bulls have the upper hand.

The 20-day EMA results show that the market balance is tilted in favor of buyers. This analysis must have boosted the traders and investors to invest more in this cryptocurrency, hence increasing its value further, which works more advantageous for STEEM.

What makes Blockchain unique and secure?