Terra was originally among the market leaders in creating stablecoins using algorithmic processes, but the sudden collapse of its collateral and sync pairs has created a massive uproar aiding in the overall negative development in the entire crypto space.

Despite the 99% losses, LUNA has once again attempted to rebuild its empire, and this time, it’s getting support from Binance. Binance will very soon be offering a burn mechanism for Terra (LUNA) to strengthen its stability by reducing its available supply volume. The rules for this mechanism have already been established and mentioned on a Binance website.

Based on its liquid supply, Terra’s market capitalization has reached $322,785,177, while the circulation supply is 127,475,474.31 LUNA. The outlook for this token in the short term might be full of profit booking and new hurdles, but in the long run, the outlook might return to positive once the developers have proved the stability of LUNA.

Terra (LUNA) witnessed a sudden spike during the second week of September creating an immense positive sentiment. But this sentiment was cut short by sellers who booked their profits to cover the losses incurred from previous sessions. The current price movement outlook showcases a tough condition as 50 EMA has become a strong retracement level helping sellers make huge profits. Should you do the same or hold your Teraa tokens? Read our LUNA prediction to find out. 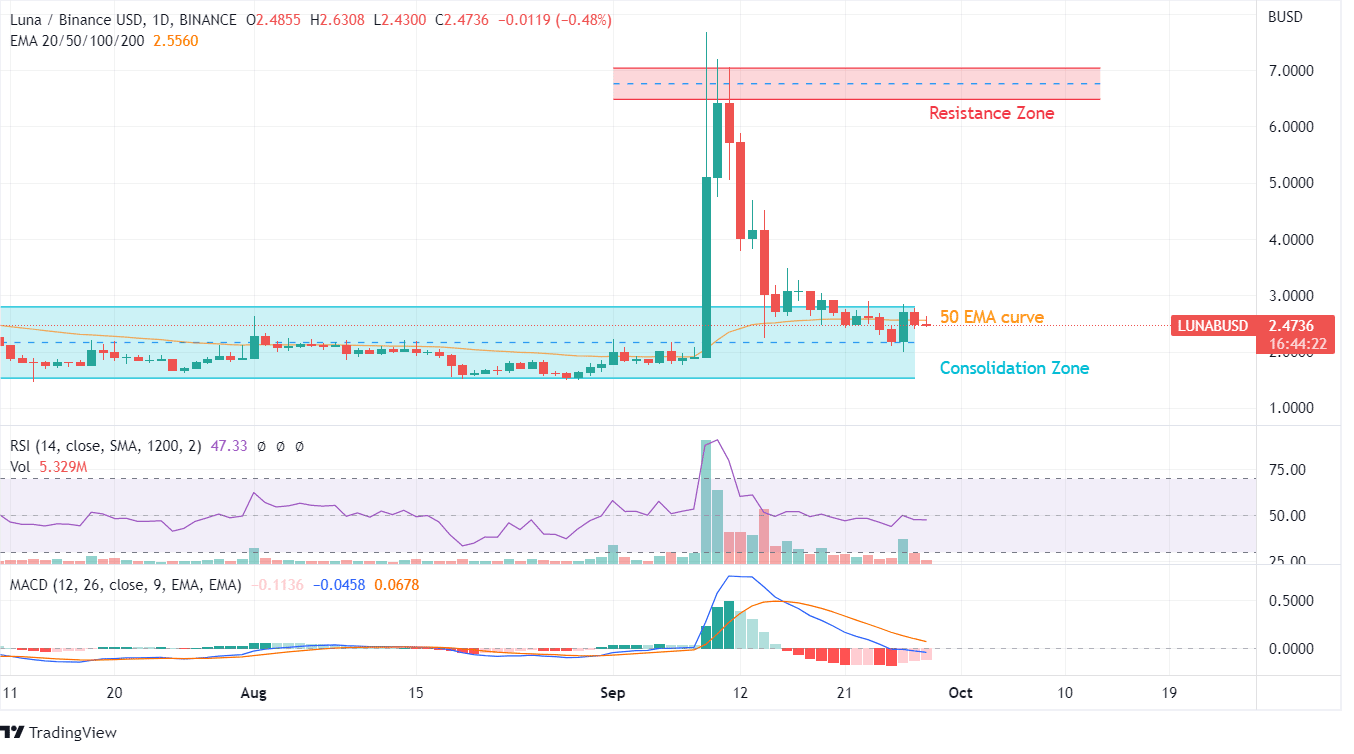 The uptrend curve for LUNA ended promptly with a clear indication of a negative trend of consolidation to continue till a piece of fundamental news is released to incite buyers. The recent jump helped LUNA breach the 50 EMA curve for a brief moment before creating a profit-booking stance that destroyed half of the gained wealth.

On the MACD indicator, we are witnessing a fresh revival of buying spree since the negative volumes have started to wither off. On the RSI indicator, the outlook remains consolidative and similar to that before the spike of September 2022.

Even on weekly charts, the gains achieved because of sheer news and buying spree were shortly engulfed by sellers indicating the overall profit booking sentiment that has developed for LUNA.

In the long term, this outlook can change if buyers consider price action as a metric to gauge the future potential for cryptocurrencies. On weekly charts, the buying trend RSI is trading above 54, which is a slight improvement over the daily chart data of 47.

Uniswap (UNI) Reaches the 100 EMA Curve After a Brief Fallback!