Yesterday on May 29 Tether reprinted and released the previously locked tokens due to October 2018 contraction. Now its total supply has surpassed the 3.1 billion USDT.

The Court verdict against Tether and Bitfinex exchange will decide whether Tether is an investment option or not. Also, the case has confirmed the investments of Tether in Bitcoin, and it can be disposed of with only penalties.

If there is one cryptocurrency which is stable from its listing in 2015, it is Tether. The current change from its all-time high 1.21 USD is less by 17.35%, and all-time low 0.849809 is  17.67%.  When the other digital assets went up steeply and fell or some are retaining their positions, Tether is considered to be stable all along.   For nearly the past 4 years it has been only trading in this narrow range of a change of less than 50%.

Even the case against it in court and yesterday’s news of increasing its supply beyond the 3 billion also saw little movements in its price.  Neither the Bull Run of 2017 nor the plunge in 2018 in the cryptomarket made an impact on its price movements. Hence, rather than an investment option as a digital asset, it may be considered as a haven for hedging against currencies. 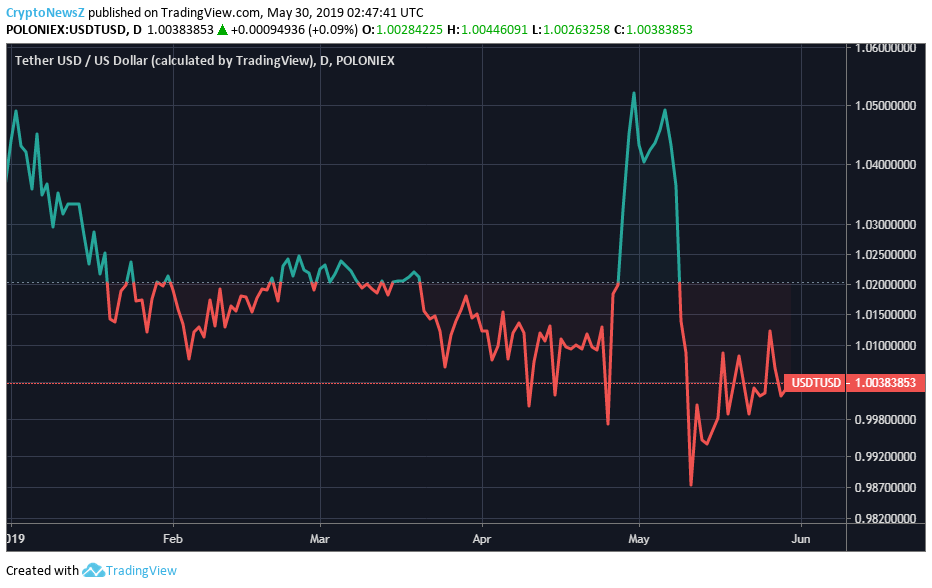 It started its day at 1.00 USD and so far is only trading at the same rate.  There seems to be no possibility of any significant change in the price today as well.

In 2019 Tether was trading with a high of 1.05 and a low of 0.974206. But one interesting factor to note is the change in the daily trading volume. Till March 2019 the trading volume was only below 10,000,000,000.  And from April 2019 it has steadily increased to a trading volume now of approximately 25,000,000,000.  It is a rise of nearly 150 % in trading volume.  It could be due to the news of its increased supply or the confirmation of its investment in Bitcoin in the court case. But since there has been a significant change of volume for the past two months, the following levels are given:

Based on its narrow range, the resistance levels are as follows:

With the coinciding the good and the bad news and a 150% increase in volume, it has to be seen in the coming days how Tether performs. From the current price, if it goes beyond the first resistance level, it is likely to march towards its all-time high of 1.21, which gives a 21 % return from the current trading price. Since it is trading steadily around one dollar, it may be a safe bet for short term returns and hedging cryptocurrencies.

Monero Price Analysis: Despite The Volatility, XMR is Holding the Bullish Trend And Will Soon Cross $100 Mark