Tether is often referred to as a controversial cryptocurrency with tokens which are issued by Tether Limited. It is often meant to mirror the value of the US dollar. It was created with the aim to build a stable cryptocurrency that can be used like digital dollars. Tether (USDT) is the most stable coin, and one can replace the dollar with this coin on many popular exchanges. According to its site, Tether converts cash into cryptocurrency for anchoring “tether,” the value of the coin to the national currencies like Euro or US dollar.

Price analysis of USDT on the basis of Tether charts 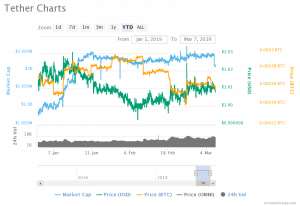 According to Wall Investor, one’s revenue from his five-year investment on Tether can be around +18.48%. According to this website, Tether must not be considered as an investment as it is issued as a stable coin and is often related to a fiat currency. It is better to buy this as a possible temporary hedge against digital currencies. According to the crypto analysts, all altcoins have a chance to get hiked up this year and Tether too is expected to rise up to $1.97 to $2.05 this year. So far long term investment of USDT is concerned, in 2025, it is expected to grow by 75%, and its price can be around $3.782 to $4.021.

It is better to consider Tether as a long term investment tool. Although it is not expected that this crypto will rise high in this year, in the long term basis, it can be benefitting to the investors to make good profits.

Introduction to DERO and Why it is Being Considered as the Next Big Thing?