Tezos (XTZ), an auto evolving multipurpose blockchain, offers creation of smart contracts and decentralized applications. Formal verification is required every time it’s used assuring full proof security and reducing the cost of bug-ridden code. The auto-upgrade feature also facilitates the integration of future amendments convenient and seamless. Built on OCaml programming language, Tezos is developed by Arthur Breitman, ex-Morgan Stanley & ex-Goldman Sachs analyst, who believes that on-chain governance is a key driver of innovation in Blockchains and Tezos was the first to really push the idea through its proof-of-stake consensus algorithms. 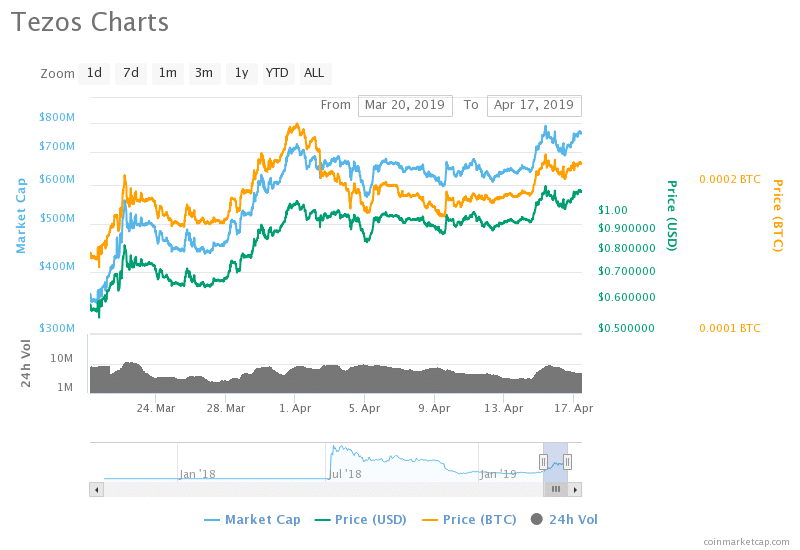 Tezos has been able to cross the USD 1 mark and maintained it throughout the week. Although the coin has shown a downtrend in the past one month, the market capitalization has increased tremendously. The weekend also recorded a huge price upswing which restores investors trust and maintains their interest. The record-high of $232 million fundraising amount in 2017 ICO (Initial Coin Offering) is a mere reflection of the potential of this crypto, and as the founders claim, they have just scratched the surface of the blockchain platform, and there is a lot more innovation and possibilities in this self-amending security based platform.

It’s getting better for Tezos with each passing day. Kraken announcing addition of XTZ ensured brings it at par with BTC and ETH. Very recently, Coinbase Custody also announced the launch of Tezos ‘baking’, bringing focus from key investors and analysts. According to Tezos Prediction, the price can be expected to grow steadily in the next two quarters and reach up to $1.50 by the end of the year. The performance also depends on its peers, mainly BTC and the price may fluctuate relatively between USD 0.80 to USD 1.20 in the coming days. In case the coin survives these bumpy rides full of ongoing legal issues & continues to gain & grow support from the community, it might touch a high of USD 100 – USD 500 by the end of 2022.