Having features like support for decentralized applications and smart contracts, Tezos (XTZ) is a multi-purpose platform which was developed by ex-Morgan Stanley analyst Arthur Breitman. For blockchains having a self-correcting protocol and on-chain governance in order to manage the network modifications are a long shot; however, these are the features where Tezos leaves its competitors far behind. There is a special feature in Tezos called ‘baking,’ which is used to earn XTZ tokens. Users in Tezos called bakers and put up deposits. In return, they are rewarded for signing and publishing blocks which are further validated by witnesses. If any baker is found dishonest, they lose their XTZ deposits. On the technology front, OCaml programming language is used in Tezos platform. OCaml is known for its functional, imperative, and object-oriented styles of programming. 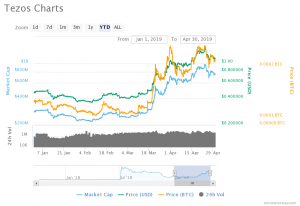 Tezos (XTZ)’s trading history over a period of time:

Tezos (XTZ)’s focus on project development is the main reason for its market grip. In the case of most of the cryptos, they create a lot of hard forks that command the chain. But unlike most of the cryptos, the XTZ team proposed that the digital commons be in charge of arranging gradual improvements for the platform. On top of that, in order to inculcate complete decentralization, the crypto team introduced formal verification and incentives for developers. Recently, the value of Tezos hiked by more than 18% when the news regarding the launch of a new platform, designed by the Coinbase, came out.

According to experts, there is a bearish trend in Tezos right now but its long-term trends seem to be bullish and crypto may touch $5 mark around EOY. Check XTZ predictions by experts to find more information about the long-term prices of the coin.