Last year, KRONN Ventures AG catalyzed the coming together of financial committees from Vietnam, Philippines, Cambodia, Bangladesh, and Sri Lanka. This was done to establish a consortium in order to build an international platform for transactions that depend on Blockchain Technology. The experience of KRONN Ventures will prove to be a great source of growth to this partnership and for fulfilling the vision of creating a high-class crypto exchange on a global scale. KRONN Ventures has also worked with King’s College from London, UK, for an AI research facility in the past. 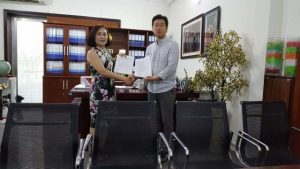 The stronghold of Linh Thanh Group within the country and the prominence of KRONN Ventures should result in a glorious impact not only on Vietnam but also on the other Asian countries, according to the press release. The future depends on how much and how far this opportunity gets churned and is put to use in the right direction.

This move from Linh Thanh Group is a leap to catch hold of the crypto fever and to seize the high tide profits of the crypto land. Still, we can’t ignore the fact that the crypto market in the Asian countries is still a hard nut to crack. The decentralized nature, privacy features, the power is given in the hands of the users, the cross border transaction scope, the much lower transaction fees with way faster processing time; all this in a way threatens the traditional financial infrastructure. Asian markets have a long way to break through and reach the current crypto scene in the west.

Back in January, KRONN Ventures AG announced that it has entered into an agreement with Bitforex to create a real-time foreign currency remittance system which is based on the blockchain technology. Bitforex  is a global digital currency exchange based in Singapore. When it comes to coin market cap transaction volumes, Bitforex has managed to outshine the big shots such as Binance, BitMex, and Bithumb in coin market cap transaction volumes. The exchange allows the users to trade over 120 types of digital currencies and has the user-base from over ninety countries.

Bingbon All Set to Partner with SlowMist to Strengthen Security Measures