Toncoin is a layer-one blockchain decentralized protocol that was used by Telegram. Later, it was taken over by TON Foundations and renamed ‘The Open Network.’ It was started in 2018, but since 2020, it has been developed by a non-commercial group of supporters and independent enthusiasts.

The aim is to integrate Toncoin as an easy-to-use application for fund transfers where TON tokens will be used for transaction fees and other payments. The best part is that the TON network uses proof of stake consensus, which is scalable and energy-efficient for long-term sustenance. The platform provides customers with transparent, secure, and faster transactions with minimal fees through third-party applications.

The developers intend to create an ecosystem with decentralized services and storage for instant payment platforms. It is a community-driven blockchain that offers faster transactions at lower fees.

In 2018 Telegram planned to launch Gram, an on-chain token. It was getting popular, so the US Security and Exchange Commission banned Gram considering the users’ security. Later, the project was initiated as open-source code by the developers of the Ton Foundation.

Ton is unique because it has a multi-level structure that helps in sharding. It is a process of creating multiple subnets on the main blockchain to fulfill specific purposes. In this way, the subnets divide the task into smaller segments, which makes the process faster and more scalable. There are many competitors of Ton, but the ultra-fast transactions make it a leading choice for fund transfer. Should you invest in TON? Read our technical price analysis. 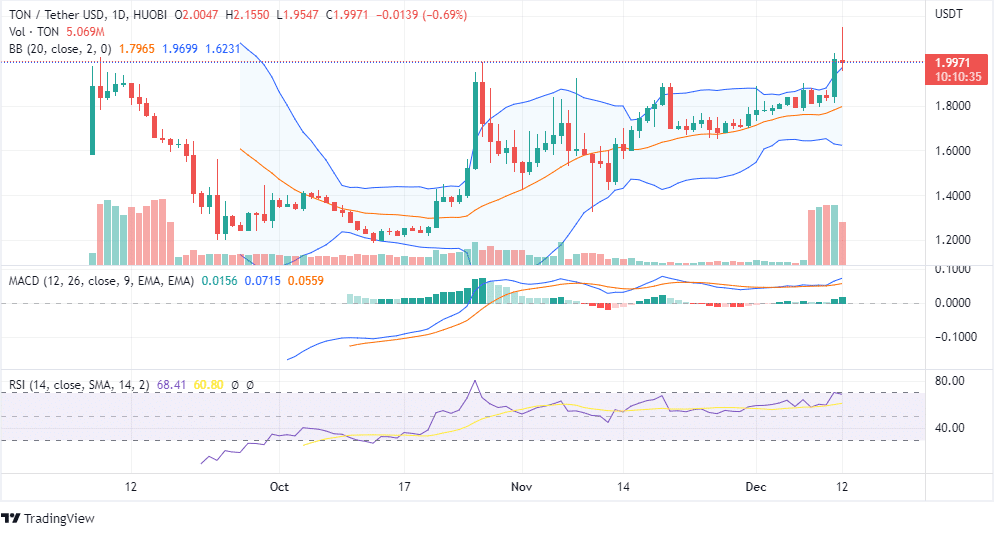 At the time of writing this post, TON/USDT is trading around $1.99, which is a crucial level because it has a strong resistance of around $2. In the last 24 hours, the TON price has crossed the resistance but could not hold the level. As a result, it is now trading under the resistance of $2.

Indeed, the TON token has been in an uptrend for the last two months, but on the daily chart, it has crossed the upper Bollinger Band, which is the primary indication that the price cannot survive at a higher level. On the daily chart, $1.71 is strong support for the coin, if it breaks $2, it might come to this support level, but the current price is not a confirmation of a short-term downtrend or the end of an uptrend.

Indeed, the Toncoin price might consolidate between $2.13 and $1.88 in the next few days. On the daily chart, MACD turns bullish, and RSI is over 60, which suggests a continuation of this uptrend.

The long-term view will depend on the market adoption, but if you have brought TON/USDT around $2 for the short term to enjoy the uptrend, we would suggest you set a stop loss of around $1.7. On the above side, it is tough to predict any target, so you have to follow a trailing stop loss for profit booking.

NYC Blockchain Community Evolution: 2023 and Beyond

Polygon (MATIC) battles with $0.95: Is another drop coming?