Sunday, July 29, Crypto markets have observed a lot of ups and downs in the last 24 hours, with 9 out of 10 cryptocurrencies are slightly in green.

Bitcoin is little up by up to 1 percent in the last 24 hours and it is trading around $8,206 at the time of writing this article, with a maximum value of $8,285 in the whole day. The market cap of bitcoin has reached the highest $8,431 this week after the crypto market has got back in action from July 15. On evaluating the biggest gains happened in top ten coins in last week, Bitcoin is as high as 39% when compared with last month. 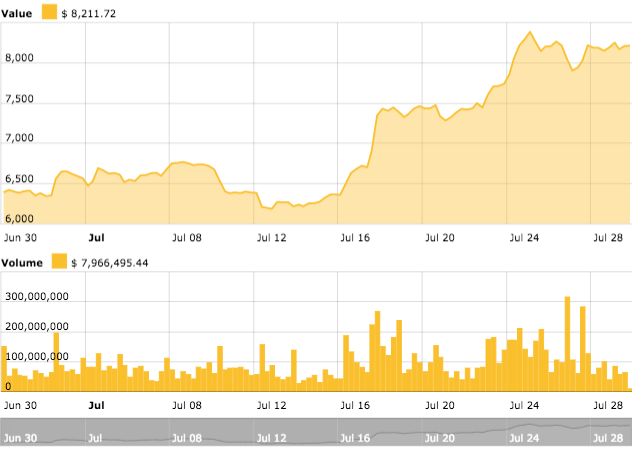 Apart from Bitcoin, there is also growth in other altcoins in the crypto market. But, bitcoin is leading the market with a growth of 47%.

Ethereum (ETH) is down by a small percentage in the last 24 hours period, trading at about $466 during the press release. Ethereum value keeps varying around $460 with reaching to $470 in the whole day. In the last whole week, ETH has reached its maximum value of $483 on July 25. 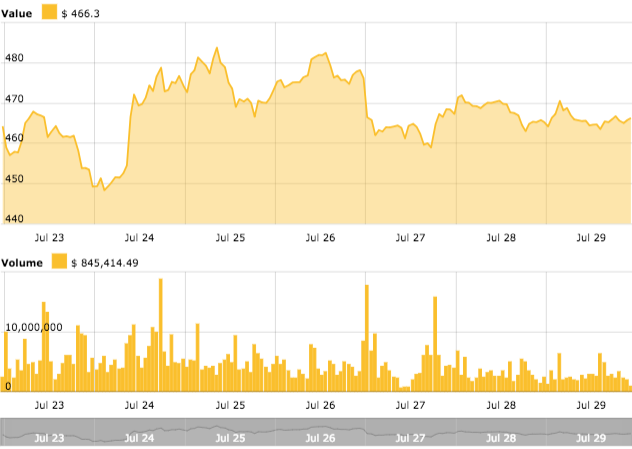 Tron has observed the highest gain in the last 24 hours, gaining about 8.5% during the press release. There has been a fight between Tron and Tether to remain in the top 10 crypto list. Tron has surpassed the market cap of Tether. During this press release, TRX’s market cap was about $2.6 billion, however, Tether’s market cap has reduced from as high as $2.7 billion to $2.5billion as per Coinmarketcap.

Previously this week, on July 26, U.S Securities and Exchange Commission (SEC) formally rejected the Winklevoss twin’s petition regarding review of the earlier rejection of their Bitcoin-exchange traded fund (ETF) in March 2017.

Afterward, Hester M. Peirce commissioner of SEC declared an official notice of the second rejection of the Winklevoss’ application. Peirce further debated that the Winklevoss has crossed “its limited role” which is only concerned about the roles of basic BTC market, instead of any of the derivatives which applicant intended to list.