Tron is a blockchain based, a decentralized platform for the global digital entertainment industry. It was developed and invented by Justin Sun. The protocol of Tron (TRX) is built in such a format that it enables developers for creating decentralized applications and smart contracts which they can publish freely on their own and can also store data and other content. According to the TRX developers, the ecosystem encompassing this decentralized platform is specialized for offering huge scalability, consistent convenience, and reliability for processing all transactions with greater speed but, with minimal or with no transaction cost.

Price analysis of TRX on the basis of the TRON charts 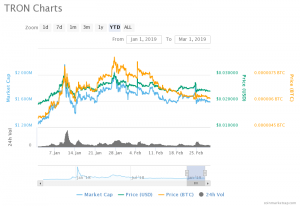 Tron is one of the fastest growing cryptocurrencies that had caused a great stir in the global entertainment industry arena. According to the cryptoanalysts, the value of TRX is susceptible to reach $12 by the end of 2019, and in 2020, it can even be as high as $52.91. At the beginning of this month, TRX’s performance had been amazing as it achieved 100 million transactions in just 173 days. This implies that approximately 578,034 transactions get carried on TRX every single day. Its long term price is unpredictable though; the cryptoanalysts said that Tron might not be as highly valued as BTC or ETH but, it can gain a higher reputation in its upcoming days.

As per the above predictions and the current resistance level of TRX & our Future TRX Price Forecast, it is better not to invest in TRX now as its price is not remarkable. The cryptoanalysts are also uncertain about the long-term investment in this crypto.

A bearish trend line is persisting on the price range of TRX since one month back, and there is the no sooner probability of its price hike. It is better for the investors to remain aware of its price volatility so that they can make effective decisions regarding investment on TRX at the right time.

One Can Expect Moderate Returns From Stellar This Year