TRON (TRX) is a decentralized blockchain technology that strives to build the future of a truly redistributed internet and global free content entertainment system. It represents an architecture of an operating system based on the blockchain. TRON (TRX) enables any developer to create smart contracts and decentralized applications which include free publishing, owning and storing of data and other content. Massive scalability and consistent reliability of TRON protocol provide a high rate of throughput computing. According to the TRON Foundation, the ecosystem surrounding this network is well-equipped to take on the challenges of the future of the internet regarding the free publishing of entertainment content. Tron is a non-profit organization based in Singapore. 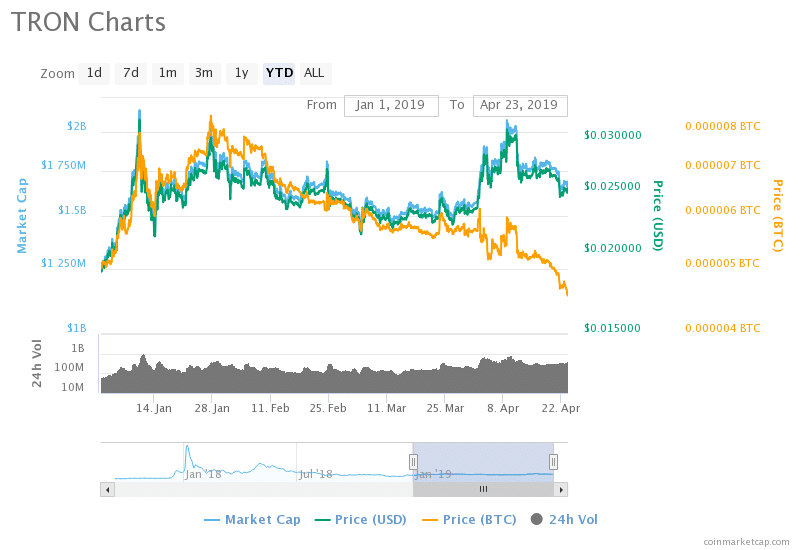 Let’s have a look at historical fluctuations in the price of TRON (TRX):

In June 2018, TRON (TRX) acquired legendary peer-to-peer sharing platform BitTorrent. However, the enthusiasm cooled down soon when it was announced that TRX would not be the native token of BitTorrent. But a new token named BTT will be issued in the place of TRX. If one looks at the highs and lows in TRON (TRX), similar to the rest of cryptocurrency, is closely tied with the fluctuations in the price of Bitcoin. According to various analysis and our TRX Predictions, Bitcoin (BTC) may not see too much action this year, and a similar trend is expected at the price of TRON (TRX). Nevertheless, TRON might see a group of fresh investors coming in after partnering with payment platform PayPal. If this bullish rally that is going on in TRON (TRX) continues for the next few months, it is most likely that by the end of 2019, it will hit the $1 mark.