Tron is a peer-to-peer decentralized blockchain that aims at connecting the mammoth global content and the entertainment sector. The Tronix transaction model is called UTXO, where a set of rules help unlock a specific set of the amount that has been sent through TRON. The creators of digital content receive revenue directly from consumers. Tron primarily aims at spreading the data without any limitations; the users are permitted to upload and store data, videos, and audios. The uploader receives profits of a value proportional to their contribution. 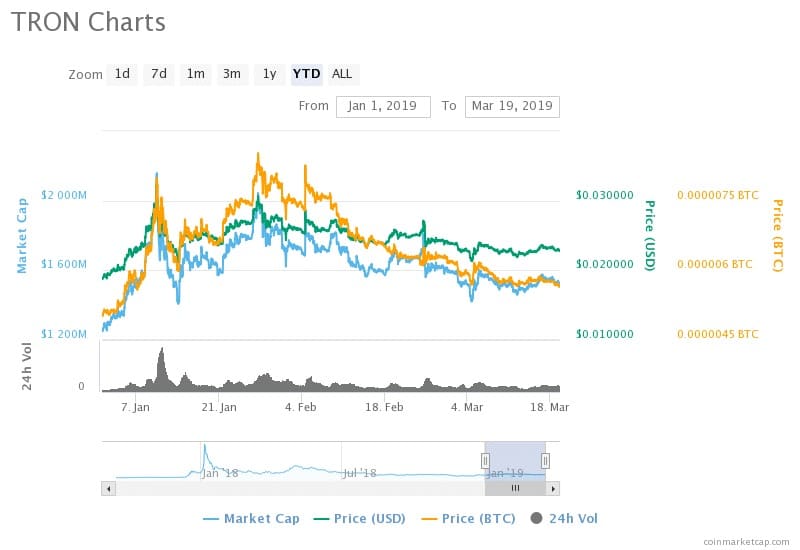 TRON (TRX) is the 10th largest cryptocurrency stated by Coinmarketcap. As per stats, the MCap value of TRX as on March 19 at 14:44 UTC is $1,525,938,598 USD with its corresponding 24h volume of $166,869,115. The market trend analysis shows that the MCap values of TRX have been fluctuating and have been majorly going on a downtrend.  The Mcap traded at 1250 million dollars at the beginning of January and reached the peak twice- January 10 with USD 2,157,760,956 and January 27 with USD 2,023,240,971 which is the overall all-time high. However, the recent high trades at USD 1,809,657,452, with the current market cap value lower comparatively by 18.59%. The values going downtrend from its peak reaching the current value show the exertion of bearish pressure on the cryptocurrency’s market. This is proved by the declination of the present-day MCap values from its 14-day moving average. The values plummeted from $1,558,833,964 on March 05 to the current value by 2.11%.

The 20-day EMA shows a downtrend with the current MCap value lower than the corresponding value of $1,619,050,044 on February 27 by 5.75%. Unfortunately, both the averages do not support market growth. Under the bearish pressure, the market balance is rested in favor of sellers. The investors who are keen on investing in this cryptocurrency, the current fall offers an excellent opportunity to invest for the long term. However, as per CryptoNewsZ’s TRX price prediction, for traders with short term investments, they will have to be on hold until there is an improvement in the market.