Along with security, it works to deliver a large amount of data transfer and rapid confirmation rates which the other cryptocurrencies lag behind. Verge is denoted by XVG from its original name DogeCoinDark. It got rebranded in 2016 to VERGE. With Verge, coins can be stored in offline mode.

Verge uses various technologies like- Enter Tor and I2P and Waith Protocol to ensure users anonymity. Tor is an IP address anonymization scheme that helps in hiding the user’s identity and I2P, known as the next generation solution for anonymization, provides dynamic routing of various information packets. It also uses two separate tunnels – one outgoing and one incoming. Waith Protocol lets users choose between public and private transactions. Public transactions offer speed and transparency while private transactions will be hidden and not be seen by anyone on the network. The use of Simple Verification System has declined the transaction speed of Verge to 5 seconds. 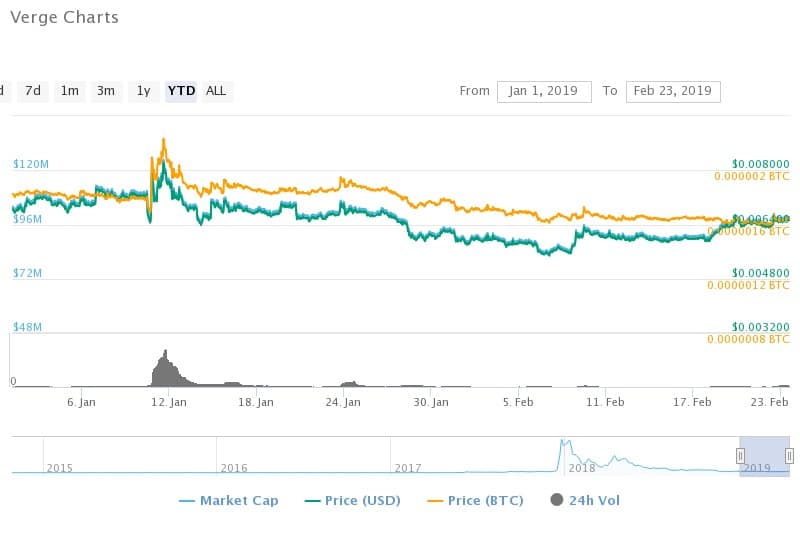 Verge is the 51st largest cryptocurrency according to CoinMarketCap. The market value of XVG for its 24h volume of $967,854 is USD 99,380,206 on 23rd February at 13:54 UTC. The market cap value of the Verge has been wavering since the beginning of 2019. The currency reached its peak on January 11 with its market value reaching 120 million. However, the values dipped and have been gradually going downward. The market started to improvise only after February 8th with a minute increase in values. The market cap value grew by 17.95% from $84,253,681 on February 08 to the present day value. The 20-day EMA also exhibits an uptrend in the values. The percentage increase of 11.48% from 89,142,542 on February 03 2019 has been minutely significant.  This shows that the bulls have the upper hand on the digital currency’s market.

The price of XVG/USD pair is $0.006550, and that of XVG/BTC is 0.00000165 on February 23rd at 13:54 UTC. Based on the analysis by Coinmarkcap, the data about the trading moment of price and Market Cap value has been deducted. The reports show that the price of BTC has been ruling the market with the MCap value and price of USD beneath. However, all the values merged on February 19, 2019, and have been overlapping each other ever since then. The prices of both BTC and USD were at peak with the MCap value on January 11th with values $0.008217 and 0.00000223 respectively. The prices then started deteriorating. While BTC had a decreased percentage of 18.39 from its peak value, USD decreased by 18.39%. The prices have been improvising since February 08. There have been many insignificant dips and rise with prices being range bound. Nonetheless, the cryptocurrency reached its milestone between February 08 and February 18, when price rallied from $0.005553 to $0.006273 with a 12.97% increase in a span of 10 days.

The 14-day moving average shows values ascending from 92,864,162 USD on February 9th to 99,380,206 USD (current value) and a 7.02 percent increase. With both the averages going uphill, the cryptocurrency has entered the bullish market. Though both the averages point towards the bull, the percentage rises in both the averages are not outstanding. Hence, investors with long term investment plans would find the market in favor of them. However, traders with short term investments will have to observe the market trend before investing. Once the values increase steadily, it will turn out advantageous for the traders, and they will attain more benefit from it.

Market Analysis on ICON (ICX) and its Extensive Growth