The Verge cryptocurrency was introduced to resolve concerned privacy issues. Most of the cryptocurrencies had open public blockchains. The verge cryptocurrency’s focal point aims at making transactions untraceable and anonymous. Verge uses various technologies like- Enter Tor and I2P and Waith Protocol to ensure users anonymity. Tor is an IP address anonymization scheme that helps in hiding the user’s identity and I2P, known as the next generation solution for anonymization, which uses two separate tunnels – one outgoing and one incoming. Waith protocol lets the users choose between public and private transactions. 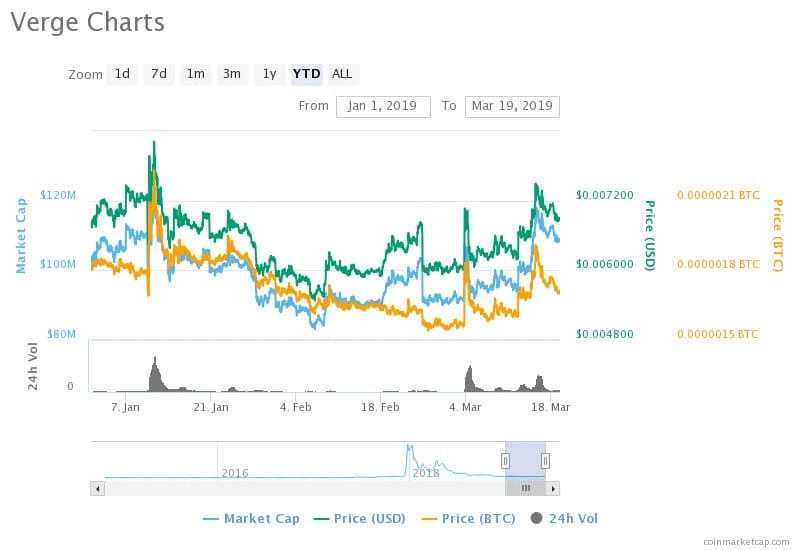 Verge (XVG) is the 56th largest cryptocurrency according to the analysis by CoinMarketCap, which currently trades at USD 108,399,509 for the corresponding 24h volume of $1,812,273 which is relatively higher than the MCap value of $95,812,059 on February 19 by 13.14%. The crypto coin’s Mcap value has been stable and linear with no substantial downfall. XVG faced a downtrend for a short period between January 14 and February 06. However, there were no major variations in values, the lowest being USD 83,738,641 on Feb 06, which is lower than the current value by 29.45%. The loss was recouped with a stable increase in the MCap value after that. The cryptocurrency reached its all-time high on March 15 with a value of USD 118,226,226. The current value is lesser than its relative highest by 9.07%, which is negotiable considering the overall uptrend in the market. The 14-day moving average proves the uptrend in the market with the values rising from USD 95,430,591 on March 05 to the current value by 13.59%. This exerts a bullish pressure on XVG’s market.

The 20-day EMA also exhibits an uptrend in the MCap values with the numbers rising from USD 91,572,899 to the present day value with a growth percentage of 18.38%. With both the moving averages in support of the growing market trend, the balance points in favor of the buyers. Hence, they invest time for both long term investors and short term traders. The cryptocurrency is in its prime for the investments to receive high profits. The traders’ contribution will increase the value of the cryptocurrency tremendously.

Maker (MKR) Price Analysis : Is It Worthy To Invest In MKR?