Verge is an open-source blockchain with its primary focus on privacy. This token utilizes the TOR and I2P network to anonymize the IP addresses of the users on its public ledger. Whilst TOR (The Onion Network) is a peer-to-peer network that uses multiple different servers to hide the location of the users, and it works as an intermediary between our IP address and the verge blockchain, I2P is more anonymous because of the different paths used to send and receive messages on the transaction. Verge’s blockchain is fast due to the use of Simple Payment Verification (SPV) and scalable (100 transactions per second), and the cost of the transaction is about 0.01 XVG, which is the least amount for a transaction fee. Another advantage for the Verge users is their ability to switch between private and public ledgers on the blockchain.

Verge was introduced into the crypto market as DogeCoinDark. However, the value of the cryptocurrency increased in 2016 when it was rebranded as Verge. The crypto cons for Verge is denoted by XVG, which can be mined by anyone using CPU, GPU or ASIC. Affordability of the coins and the process of mining make Verge popular amongst its community. Transactions on the verge platform would cost less than a cent. 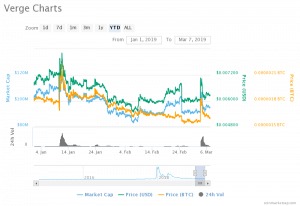 According to the stats from Coinmarketcap, Verge is ranked 54 in the crypto market. The market cap value of the cryptocurrency on March 07 at 08:34 UTC is $95,019,445 USD for its corresponding 24h volume of $1,424,244 which is relatively higher by 12.88% from its equivalent MCap on February 06 with a value of $84,179,068 USD. This is calculated based on the total supply of coins in circulation which amounts to 15,172,086,051 XVG out of a maximum supply of 16.5 billion XVG coins. The cryptocurrency’s MCap values have been range bound between 96 million USD and 100 million USD with a few instances of high and low exceeding the range. The value of XVG reached its peak on January 11 trading at USD 123,597,689 which is 23.12% higher than the current value. However, the currency underwent a downtrend period between January 28 and February 18, reaching its lowest point on February 07 with a value of USD 83,131,881. The improvised values after the downtrend neutralized the market trend when the value touched a high of USD 107,196,757. Nevertheless, the market has gradually started dipping reaching the current value which is lower than the last high by 11.36%. In addition to this, the 14-day moving average also displays a decline in value. Although the percentage is negligible, the overall market is descending, and the bearish pressure is exerted on the market.

Based on the analysis by Coinmarketcap, the data about the trading moment of price and Market Cap value has been deducted. The current price of USD and BTC on March 06 are $0.006263 and 0.00000160 respectively. The prices of both USD and BTC have been heavily turbulent. Bitcoin’s price was substantial at the beginning of January 2019 with values reaching as high as 0.00000223 which is enormous by 28.25%, compared to the current price of BTC. Nevertheless, the price values have been going down after touching its peak. Although Bitcoin’s price encountered a brief high on March 07 when the values reached 0.00000184, the price values are back to declination. The price of USD has frequently been oscillating compared to the MCap values and the price of BTC. The price reached it’s all-time high and low along the MCap value on March 03 and February 07 with the values of $0.007065 and $0.005479 respectively. The current value is an intermediate between the high and low values of the price of USD.

The 20-day EMA exhibited an uptrend of the market as the values rose from USD 90,030,762 on February 15 at 23:34 UTC to the current value of USD 95,019,445 by 5.54%. However, the percentages of moving averages are both negligible, and the down trending market values show the bearish pressure. Hence the market points in favor of the sellers. Investors with long term investment plans will have to wait until the market improves. The traders, on the other hand, with short term investment plans should explore the market further and invest once there is an uptrend. This will increase the value of the cryptocurrency and work out advantageous in the future.