Verge (XVG) was developed in 2014 by a team of developers and was originally named as ‘DogecoinDark’. Privacy and anonymity of users, besides being an open source coin, is the USP of Verge. In order to secure the identity of users, Verge uses Tor, an anonymity tool, and an anonymous network layer I2P, in order to encrypt IP addresses and locations of transactions. Verge uses Simple Payment Verification (SPV) protocol which reduces the transaction speed significantly. And on average it takes 5 seconds to complete a transaction in SPV protocol. Additionally, the introduction of the Wraith Protocol upgrades in Verge (XVG) took the stealth to another level. Now, users can send and receive payments privately across the blockchain by enabling Wraith Protocol addressing services. On top of that, the Verge provides its user’s facility to switch between private and public ledgers on the blockchain technology. In total, Verge offers five different Proof-of-Work algorithms for mining which include Lyra2rev2, Scrypt, X17, blake2s and my-groestl. 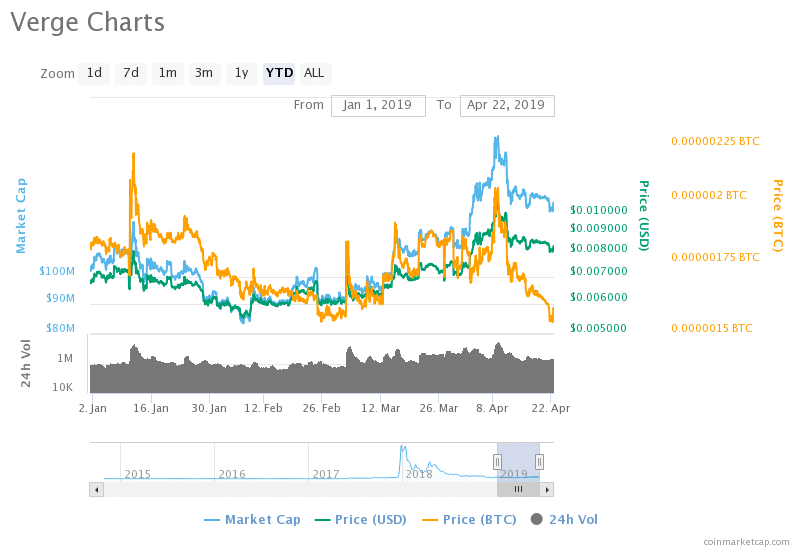 Let’s have a look at historical fluctuations in the price of Verge (XVG):

With the crypto market being completely bizarre and unpredictable, making any forecast regarding the price of any particular coin is more of a gamble and luck rather than a data-driven analysis. Nevertheless, according to the current market scenario, Verge (XVG) might see upward growth in the second half of this year and achieve a target of $0.0281 by the end of the year. In addition to that, according to the cryptocurrency analysis site, Verge (XVG) coin might reach up to $0.138 by the end of 2019. Moreover, Verge might go up by 2-3% in next 5 years.

WikiLeaks Co-Founder Gets Support From Crypto Community As Well, Bitcoin (BTC), ZCash (ZEC) And Dash (DASH) Pour In As Funds To Support His Legal Defence

VeChain (VET) Price Predictions: Short Term Trends Are Bearish, but Partnership with Producers of GOT may Pull It Through