Verge (XVG) is an open source project and a decentralized cryptocurrency. Originally XVG was named as DogeCoinDark when it was created in 2014 then later in 2016 was popularly known as Verge. It claims to offer anonymous transactions by confusing the IP address of users Tor (an open source software for enabling anonymous communication) making it difficult to determine the geolocation of its users. Transaction speed on the verge is estimated to be at 5 seconds due to the use of Simple Payment Verification (SPV). The core QT wallet has built-in Tor integration and SSC encryption which confuses the IP addresses of the users. Verge users are reportedly able to switch between private and public ledgers on the verge blockchain. 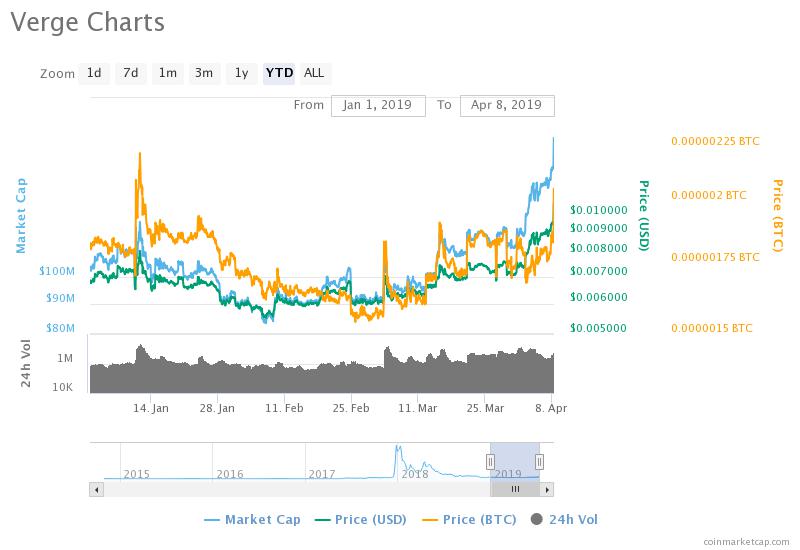 The current statistics of Verge as per the above chart of Coinmarketcap on April 8th at 4:57 UTC time is as follows:

As per the data and the chart above, it is interpreted that from the start of the year 2019, XVG has attained the highest price (USD) 0.010789 today. Comparing the statistics of previous one month from where we observe the increasing trend of Verge’s cryptomarket on March 4 with a price (USD) 0.007029; it is 53.49% higher, which is astounding for a month’s span. The year’s lowest was observed on February 6th with a price (USD) 0.005538. Now, where has the Verge’s astounding price (USD) reached? It is 94.81% more than the lowest which is a noticeable increase in its trend.

It is important to take Verge’s huge coin supply into consideration after the inception of its real name in 2016.  The team of Verge is currently working on a brand new protocol for blockchain which is called Rootstock. When this protocol begins to be implemented, it will enable the blockchain to generate smart contract technology. If the Verge successfully launches Rootstock, the price of the currency is very likely to increase. With all these initiatives to be taken by its developers, it is better to wait till it attains firmness and becomes a potential investment to give higher returns to the investors.