Verge cryptocurrency was launched in the market to resolve concerned privacy issues. Most of the cryptocurrencies that are present in the market have open blockchains that allow viewing user’s balances and transactions. Whilst, the cryptocurrency worked to overcome this shortcoming, Verge became the popular digital currency that was introduced into the market with the privacy attribute. The prime focus of this cryptocurrency aims at making transactions untraceable and anonymous. This was achieved with various technologies used by Verge – Tor and I2P and Waith protocol. Tor anonymizes the IP address and hides the user’s identity. I2P is advanced than Tor; it uses two separate tunnels – one outgoing and one incoming. The Waith protocol lets users choose between public and private transactions. Public transactions offer speed and transparency while private transactions will be hidden and not be seen by anyone on the network. 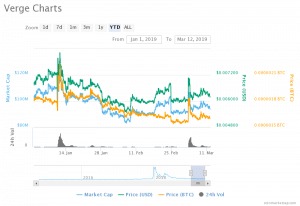 As per analysis from CoinMarketCap, Verge (XVG) is ranked 55th largest cryptocurrency and it’s market cap value is $94,245,679 USD for the 24h Volume of $1,255,610 USD on March 12. This is based on the total circulating supply of 15,172,086,051 XVG coins. The current market value is relatively higher compared to its corresponding value on February 11 of $90,406,776. There has been a 4.25% increase from the past. The volatility of the cryptocurrency shows oscillating values; there have been consequential increase and decrease in the MCap values. The 20-day EMA displays a downtrend on comparison with the present-day values. The difference between the values has degraded by 3.45%. This set back in values puts the digital currency on a bearish pressure.

The 14-day moving average shows the values going uphill from $92,416,376 on February 26 to the current value with a 1.98 percent increase. Both the averages move in either direction, and their percentages are completely insignificant. Hence the bears rule the cryptocurrency’s market. Investors with long term investment plans will have to observe the trend until it gains stability. But traders should take advantage of this fluctuating market to earn a significant profit from their transactions. Investment from traders will increase the value of the cryptocurrency in the future.