Verge (XVG) is a cryptocurrency based on blockchain technology. It has a special focus on the privacy of users. The major attraction of Verge coin is the option to do anonymous transactions and the less turnaround time taken for the transactions to be done. It is considered as an open sourced and completely decentralized cryptocurrency. It also gives the option to its users for using the TOR browser, which can conceal the IP address of the users. 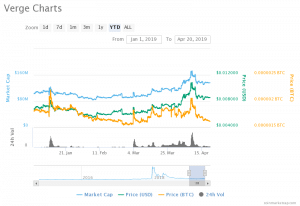 The Verge coin (XVG) has started the year with a relatively higher note despite being suffered by the crypto winter. At the beginning of the year, the coin was 0.006 USD level. Over the last 100 days, it has gained 33 %. This growth may not be as huge as other major coins, but Verge coin’s growth was completely stable with some little variations. One major abrupt growth happened in the month of January only. This coin has also gained huge after 1st April’s price rally. It gained almost 40 % in just 3 days. But due to price corrections, the price was short lived. The market cap on 20th March was 109,932,245 USD. And the value of each coin was 0.006962 USD and 0.00000172 BTC. The current market cap is 23.67 % more than the market cap of 20th March. And the value of each coin has increased by 22.83 % in the last 30 days.

The value of each coin is now being traded around 0.008 USD level. But this is likely to fall further due to price corrections. In the next two weeks, the Verge coin may get back to its original growth rate. Verge coin’s next resistance should be there at 0.010 USD. From there it may go as high as 0.1 USD by the end of 2019.

Short term investors are advised to wait for some more time before purchasing coins. The price is likely to degrade even more. The nest price for selling should come after 2 weeks. The long term path is bullish and may give around 10 times profit of holding sustains till 2020.